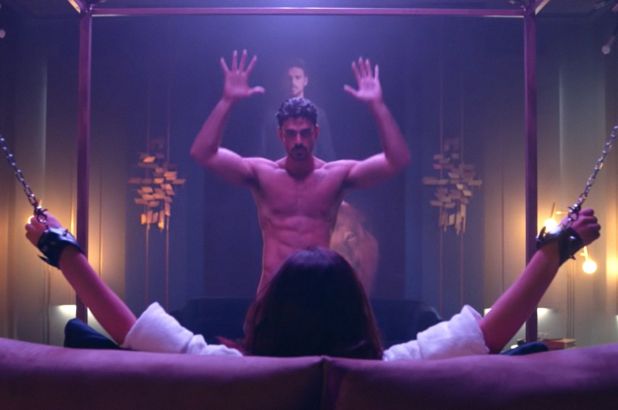 Every  once in a  while there comes  a film in that  kinky it’s-so-bad-that-it’s-actually-good sub-genre . The Polish film  365 Days is  unarguably the most vilified critically  damned  film of the decade.  And yet it tops the Netflix charts. In the month of June alone it was the most widely seen film on  Netflix.

No kidding! This,  I had to see.And  I have to say,  365 Days left me dazed for  days. It  is  a scream, it invents  a whole new classification in the business of ‘crass’ dressing.Welcome to the porn-comedy. Not that  the humour is intentional. But the  wooden  performances, the stilted editing, the  clunky storytelling  and songs that seem to be  composed by  mentally challenged school kids in a garage…where do I begin to  describe the sleazy splendour  of  365 Days?

Let me  start at the beginning,  when we see the rich married heroine Laura(Anna-Maria Sieklucka) pleasuring herself in bed all alone while the  rich unmarried hero Massimo(Michele Morrone) gives an all-new definition  to  an airhostess’ midair service …The two are  so steamed up  it’s only a matter  of time before the screen explodes  to the sound of their  love-making.

Brace  yourself  for  some of  the most inept love-making on this side of  Om Puri and Rekha struggling  to be steamy in Basu Bhattacharya’s Astha.

In fact there is this hilarious  lengthy sequence  of  the  pair making out in a luxury  boat where they simply run out of  positions  and  end up looking like two rabbits wrestling .Perhaps having an experienced choreographer  on  board would have made the  intimate scenes look  sexy rather than clumsy.

Beyond  showing skin, the  lead pair seems  to be as  lost  about lust as an anorexic model without  bust.The  film soon goes bust,  creaking and groaning with  the most  ridiculous love scenes and a  plot  twists that  seem written on  toiletpaper in a public restroom.

365 Days has been  pulled  up for innumerable transgressions including  the glorification of the Stockholm Syndrome. But its worst  transgression is  making its  handsome  lead  look so miserably handicapped in  bed(and everywhere  else that  their imagination can take  us as we follow them fatigued).

So  the  mystery question. How the hell is this flimsy excuse for cavorting in  the raw such a hit?

Related Topics:365 DaysBollywood news
Up Next