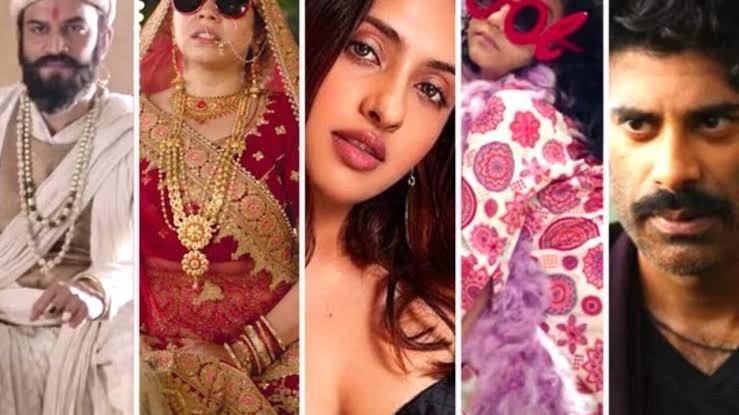 You were  probably looking at the  central performer when these scenestealers  came along crept up on the  plot  and swept away the show  right from under the main performer’s nose.Take  a look.

1.     Sharad Kelkar in Tanhaji:  Of course  Ajay Devgan and Saif Ali Khan were  resoundingly good in the lead. But  the real star of this  pseudo-historical, the biggest  moneyspinner   of  2020,  was Sharad Kelkar. As  Chhatrpati ShivajiMaharaj, Sharad with that  baritone voice and majestic walk, slayed  it.Someone  should make  a whole film  with Sharad as the central character  of Shivaji Maharaj.

2.     Manvi Gagroo  in Shubh Mangal ZyadaSaavdhan:  In a film that made a  mockery of  the gay community,Manvi Gagroo as a crazy bride on  the run hit the ball out of  the park. Unlike other comic acts by female actors  this one was not  about being overweight or oversexed . Manviplayed  this crazy woman named Goggle Tripathiwith a  joy and stride in her comic timing that were definitely refreshing.

3.     Akansha Ranjan Kapoor in Guilty: It’s  not easy to play a  character who is not afraid to address  her sexuality and is unwilling to play  the victim card after being sexually  violated. Akansha  brought in  all   the complexities  of  the  role, the hysteria, helplessness and the hope for  justice,   creating a   part that is  at once kinetic and  out of control. This  was  a tough  one  for a debutante. She sailed through   it  and  stole the show right from under the leading lady KiaraAdvani’s aquiline   nose.

4.     Inaayat Verma in Ludo:  With a cast  of stalwarts, ranging from the popular  RajkummarRao and Pankat Tripathi to  the  lesser-known Shalini Vatsa and Ishtiyak Khan, it was little  8-year old Inaayat Verma  as a  pintisized  firebrand  who plans  her own kidnapping, show stole the show.Her confident  dialogue delivery and her  supreme effortlessness made Inaayat a  natural-born scenestealer .Abhishek Bachchan says he has  never been face  to face with a more challenging co-star.With  due apologies to father Amitabh and wife Aishwarya.

5.     Sikander Kher  in Aarya: No words,just  a glance is  enough to convey this  quietly  brilliant actor’s characters’  innerworld. Sikander in Aaryawas  the bandh mutthi. The  focus, throughout  was  on Sushmita Sen and she  was no doubt a powerhouse. But  every time Sikander stood silently in the shadows I felt  the danger and the doom lurking  beneath  the polished surface. Will someone  please  write a central role in  a webseries for Sikander?