A Simple Murder Review:It Is Engaging In Parts
Advertisement 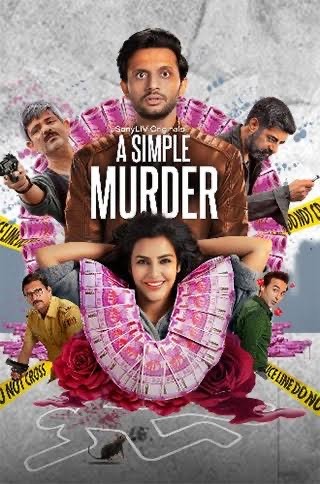 With no better  option left, the couple  in this  fair-to-fine series Manish and Richa typify the can’t-do-without-can’t-do-with  type of  relationship where sparks fly and bullets roar.Aftera while their shouting bouts  a drowned  in drivel.No matter how  many times this hotheaded couple  is torn apart by circumstances(read: screenwriters, and there are  two of them here) Manish and  Richa cannot let by-guns be  by-guns. To  our  amusement they are  constantly  at each  other’s  throat,  with guns drawn.

Bhai, nozzle na lag jaye!  This is  a  couple with greed  guiding them into a ruinous  self-destructive relationship.As Manish and Richa, Mohammed Zeeshan Ayyub and Priya Anand  bring a  dash  of  chutzpah to the table.Ms Anand looks  pretty in  close-ups, of which she gets plenty. There  is  another pair of love birds in the series  who are on the run from the girl’s powerful politician papa.

Honour killing, anyone? I must say the killings in A  Simple Murder are undertaken honorably.The violence is  interestingly staged  ,and one chase and shootout in a Cineplex is  an instant classic. Made  me wonder why the narrative squanders away  time in superfluous banter  which includes lyrics from songs thrown between two murderous ruffians, in  a mood of lethal playfulness.

The aforementioned  ruffians are played by Amit Sial and Sushant Singh.Both masters  of  their craft, they infuse their characters and situations  in the plot  with a purpose and an energy  beyond what it deserves. Sial is  specially superb  with his  raucous  mix of ruthlessness and mischief.If there is  a next season I want to see much more  of Sial and Singh.

Gopal Singh as a cop  who  may not be as corrupt as  he seems, does a rare thing with his  character: he  turn  a  stereotypical  Simmba into  something  more.Yashpal Sharma as  a  gangster moonlighting as a  goodman is also very funny even when he knocking down  victims with ill-concealed glee.

But the  glistening surface  some of  the performances is  weighed down  by what  lies underneath.Attempts to be sharp and  alert  are  successful only to a point. After  a  while it falls apart.The midriff  sags  and  the grand finale  is  so  clumsily staged it negates  almost every good thing that crops up in  the plot once in a  while.