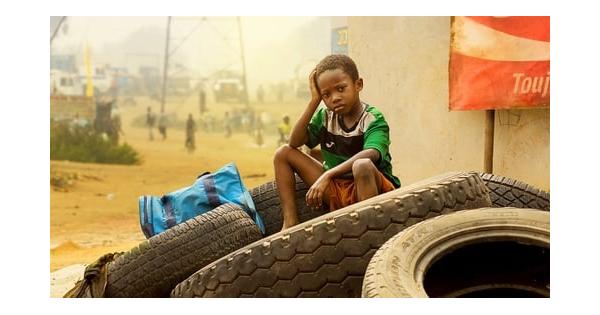 As this  nearly-flawless film about  inhuman apathy to refuges and the  kindness  and compassion of strangers, reached its  devastating closure,I  prayed  for our little hero. So young, just 6, on his own in a  big wide inhuman world,  making his bewildered  way through a sea of humanity which he  barely understands….

Adu is  a heartbreaking exposition on the refugee situation. Though it is located in Africa and  shows desperate  human beings  leaving home and crossing the line  illegally   in the  hope  of a better life, this could be  a film about Royingyas fleeing  starvation  or  the Jews  escaping concentration camps. There is  a disturbing continuity and  recency  to little Adu’s story.

Adu   flees  from Cameroon with his  Badi Didi Alika(Zayiddiya Dissou) barely more than a  child herself.  Alika dies a stunning surreal  death leaving the little  boy homeless defenceless and bereft , when he suddenly meets an older  boy Massar(Adam Nourou) who becomes a father, mother, brother and protector all rolled into one for little Adu.

I confess I cried when I saw Massar, a  complete stranger, taking little Adu under his wings doing ‘Majeek’(magic)  for the bewildered boy to smile. Their journey together  in search of safety and home is  so spectacular visually and so resplendent emotionally that  it would be impossible  for any viewer  with even a shred  of sensitivity  to not surrender  unconditionally to the free and fluent flow  of  emotions in a world that is so  mortifyingly  bereft  of  empathy and even basic kindness.

More than a film that  shows us the  imperativeness of  humanism, Adu is a damn good  adventure story filled with heartstopping moments  of suspense  and  poignancy. When Adu is whisked away in a car by a pedophile , Massar’s panic becomes  our panic.Little  Adu’s safety  our responsibility. No Adu in the world should be vulnerable to attack. I  came from this  exceptional film with one  big lesson.  Let’s  be kind to  refugees.

And  watch this  film scale summits of  triumphant  storytelling weaving in and out of chaotic  locations with the  two boys, played with  extreme  empathy  by Moustapha Oumarou and  Adam Nourou, making that run for freedom which  only the homeless know  how to.

Oh yes,  I almost forgot . There are two other subplots about the refugee situation in the  film. One is  about a  father(Álvaro Cervantes) trying to bond  with his wild daughter(Anna Castillo) .Although this subplot has a very heartwarming twist at the end,  to be honest, this story doesn’t really belong here.Ditto the  second  subplot about soldiers on trial for killing a refugee while he was trying to cross the fence  to get to  the other side of  the border.

As  engrossing as  these subplots might be, my eyes searched frantically for little  Adu each time he was not in camera range. Please, Dear God, if  you are listening.Let every in the world Adu  find a home. Or if not, then at least let  every child find a Massar to protect him from predators.Is that too much  to ask for?