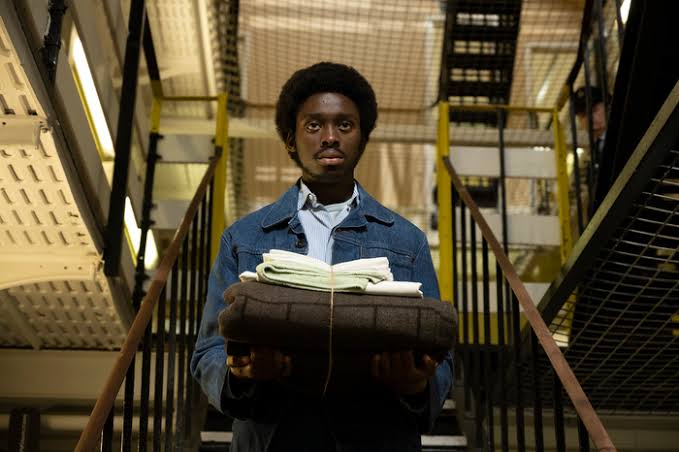 One  of the  rather  intriguing quirks  of Steve McQueen’s very fine ‘Small Axe’ series of five films, delineating  the backlash of racism that the West Indian blacks faced in  Britain in the 1970s and 80s,is  that  the films in series end with the  struggle. We never see the  protagonists enjoying the  fruits  of their success.

Alex Wheatle went on to become  a celebrated author after being incarcerated  for participating in  racial riots in Britain in 1981. He comes out determined to fight the system .The last we see of him is in a park where he  meets an  old friend whom he tells  of his plans to take to  writing. The  rest  of  the  rather sluggish film  goes into Alex’s life on the streets struggling to compose music and stay afloat.

Unlike the other four films in this  highly-rated series, Alex Wheatle has no family to support his struggles and dreams. He is  on his own. The  closest  he comes to forming a bond is when he is put into a stinking cell with a   racial protester  Simeon(Robbie Gee),a massive bulk of a man with  ambitions of being a philosopher. He soon  becomes Alex’s guide and mentor and impresses  on the  young man the importance of reading books.

It all feels  a tad too didactic and virtuous, like  a visit to a reformatory school for juvenile  delinquents where we are shown the path to salvation. There is  no dramatic core to the plot.Though seamlessly played  by newcomer Sheyi Cole, Alex Wheatle barely comes  alive as he goes from an abused childhood in  a foster home to an abused  adolescence under  police surveillance.The life that is tackled here is way  too complicated to be  put across so  insouciantly.The  film at times seems as aimless as  it protagonist. Alex wants to be  a  musician, by the  also  wants  to be writer. By the time  Alex finds his bearings, the  film seems to have lost it. There is  a lot of warmth specially in the  sequences where  Alex  bonds with his unlikely mentor and  guide. But  eventually  it all boils down to  a bio-pic that  doesn’t quite get  the  focused attention it  deserves