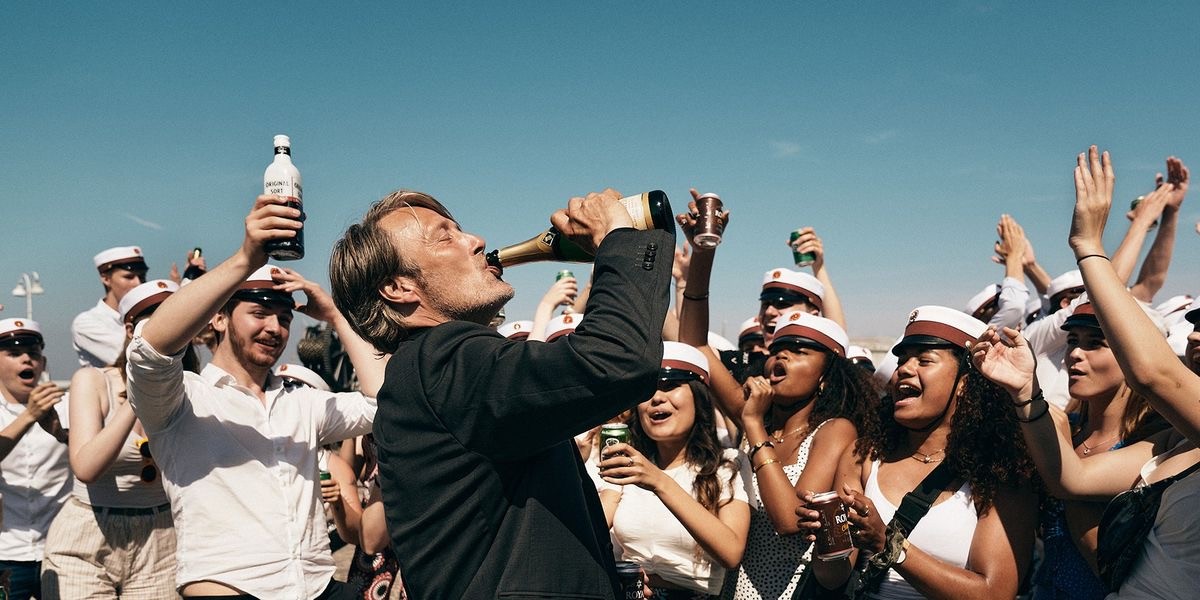 This very rumbustious  film  is described as  a “celebration of  alcohol”. I  don’t know  what that  means. But the fey sometimes moving film, gets into the  skin of   inebriation and with just about enough room for the  narration  to breathe.

The film, apparently based on  true events,  is about a quartet  of close friends, teachers  in a school in  Copenhagen   facing what is known as  a  mid-life crisis.They  decide to start consuming alcohol  at their workplace  to make their lectures more invigorating. As expected  rhe  experiment falls flat with  the four  teachers stumbling   into class with slurring lessons. It would have been quite funny to watch these misguided gyan providers.But the  film is neither  judging them nor asking the audience to judge their romance with alcoholism.They are what they are. Sozzled  scholars.

One    of  the four friends  Martin is played  by that  wonderful actor Mads Mikkelsen(so  brilliant as that caring  kindergarten  teacher wrongly accused of molestation in  The Hunt) .He becomes  the  converging  point for the plot. Martin’s marriage  has just stopped working.When one  night his wife confesses  to an extra-marital  affair he rages against her,  drinks  some  more with his friends , one of whom eventually loses his life during an alcohol-induced  adventure.

Time to sober up. Alas,  unlike  the protagonists  the  film never quite  succeeds  in  getting back on its feet once the drunken  stupor  makes way  for a moment of realization that alcohol isn’t really the solution  to  professional and personal problems. Apparently there is  a  huge problem of  alcoholism  in  Denmark.  Give the sobering statistics the film deserves praise for opening up the battles  after the bottles.

Uncorking  the strong beverage, in  a room  blaring retro music as  the  four friends dance their sorrows away  makes good camera composition.  But  once the  boisterousness  dies down there is only an  emptiness.  That empty space, this film doesn’t  know how to fill, though it tries.

Shall we say cheers to that?