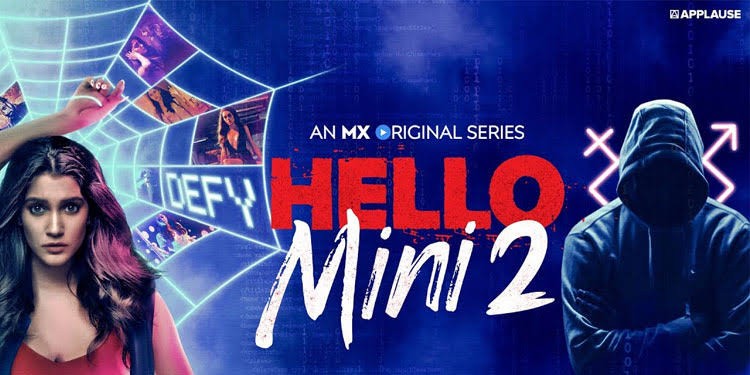 Targeted  at a particular  audience  Hello Mini in 2019  was a stalker’s best fantasy and city girl’s worst nightmare  come  true .When it came in 2019,  it  gave  every single girl in Mumbai the  shivers. Being followed around  by an  unknown admirer is hardly the best way to feel welcome  in  a city.

This time again Rivanah Bannerjee(Anuja Joshi) is far away from her home town Kolkata , again being stalked. This time the  stalker and his/her intentions  are far more dark sinster and in some weird way, the gamers’ delight , as the whole series of Mini’s misadventures in Mumbai are silhouetted  as  a kind of  flippant  exposition on  the city and  the  single girl. This time Rivannah’s stalker’s games are more complex, as they ought  to be.What’s the point  of a  sequel if  the stakes are  not upped?

Who knows what dangers lurk in the shadows  for the unsuspecting bachelorette far away from home?  Seen as an unassuming parable  on   loneliness and  its antidotes  in the metropolis, Hello Mini’s second season is  as much fun as  the  first . This time there  is a little bit more  of everything, including some serious boyfriend problems for Rivanah including an unwanted ex-girlfriend  and various  urban  predators who are  not what they seem. Then there   Rivannah’s friend who gives  an entirely  new definition to a double  life.

Thought the  performances  never rise  above the script(they aren’t meant to) the writing is  all-knowing in a winking tongue-in-cheek kind of   way. Nobody is  in this  for  serious  social  messages  or  an enduring experience one   can go back to.Slip in and  slip out with never a dull  moment in the ten episodes. That’s what  Hello Mini 2  promises. It delivers.