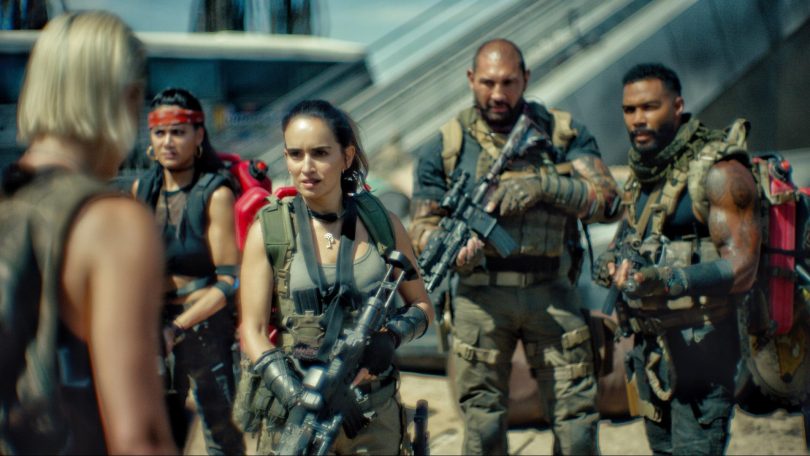 The wait is  over. Zack Synder’s  Army Of The Dead is  finally out. For us Indians, Huma Qureshi’s presence  in  the  cast  is  a matter  of great pride.  There’s always  the fear that one of our bright talents would  end up being more an also-ran  than a star attraction in one  of  these  Hollywood  biggies.

Even Priyanka  Chopra who started with a bang in Quantico was a  sexy whimper in  her most recent West quest We Can Be Heroes.

So does Huma have  enough space  in Army Of The Dead  to consider  her presence justified in the  mammoth cast? Yes and  no!  Yes, because she  has  more space   than many  of  Bollywood’s stars who have gone West.

She play a  Geeta, a refugee in a camp in Los Angeles with two children whom she  protects with   feral ferocity. In the  initial  portions  of the  storytelling she  has  some effective  moments   of  angst as a homeless mother struggling to survive. Her role reminded me of Huma in Deepa Mehta’s bleak and beautiful  Leila.

But  then—and here comes the downer—Huma  vanishes for most  of  the  rest of the 2 hour 30 minute storytelling in  Army  Of The Dead, as the focus is on the core cast of which she is unfortunately not a part.

Never mind! I’d stay  say Huma Qureshi has  more to do in this  Hollywood  biggie than  many of her colleagues  from Bollywood who went with much fanfare and came back looking like glorified  junior artistes in  the company  of stalwarts from the West.