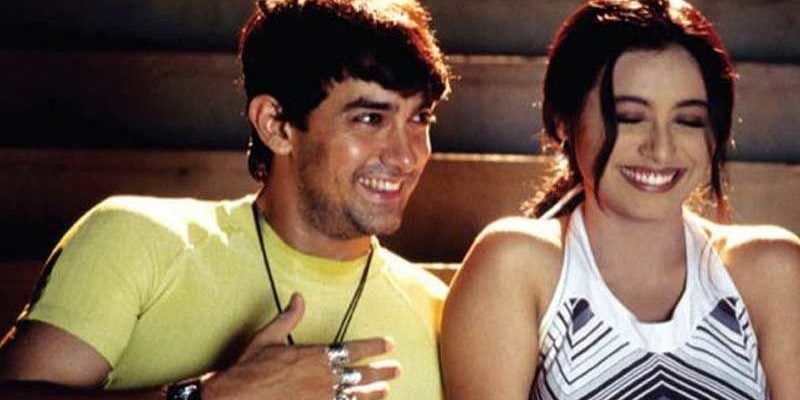 Composer Lalit Pandit  one-half  of the popular Jatin-Lalit duo who composed the  hit Aati kya khandala song  in Ghulam in Aamir Khan’s voice,  spoke  to me  about  the song’s  genesis.

Says  Lalit,  “There is  an  incident  that I want  to share  with  you.  There was  huge set  of  Ghulam at Film City an entire mohallah had been  constructed  on that set.We were all going to  see the  set.All of us, Aamir, director Vikram Bhatt, my brother Jatin and I  were squeezed  into one  car.We were planning  the music on the way to the set, when I heard Aamir humming a song…Sagar jaisi aankhon wali yeh toh bataa tera naam  hai kya from Ramesh  Sippy’s Sagar. I liked the texture of  Aamir Khan’s voice.”

That’s when the  idea  of Aamir singing  for Ghulam  came to Lalit. “I suggested to him, ‘Why don’t you sing a song?’ Aamir  though I  was joking. He replied, ‘Arrey kya yaar! Main kahan gana-wana ga sakta?’. But I insisted. ‘No, Aamir your vocal texture is so  mike-friendly. We  can compose a song  that will suit your voice.’ He  agreed.
Lalit and his brother Jatin  realized what a responsibility it  was. “To have Aamir sing was no small thing. His fans  would expect something special. During those days we  had got quite  a few  stars to sing for us, like  Govinda and Sanjay Dutt. Salman also  was keen to sing. Shah  Rukh Khan was  also a  part of a song  in Phir Bhi  Dil Hai Hindustani. Director Vikram Bhatt  loved the idea of Aamir sing.”

But the  question was, sing what???? “Since Aamir’s  language in  Ghulam was of a  Bombaiya tapori like Rangeela we decided to compose a song accordinglyAamir  was excited but cautious. He said, ‘Please  compose something suited  to my range and taste. I will sing  it  only if I am convinced it’s  good for me.I don’t want to end   up making a hash of it.’  We  assured him that the  song will be first  approved by Aamir. We kept discussing  all  the  details  of the song on the way to Film city, for example the hero was  a tapori, so he  won’t sing  poetry…we kept discussing the possibilities. After the  visit to the set that night we  got down to composing the song. The next morning  director Vikram  Bhatt was on  the phone  as  excited as can be he couldn’t get over the fact  what a sensation  Aamir’s singing would be.Everything  else was put on pause.”

Now began the search for  the  perfect tapori song  for Aamir. Says Lalit,  “We  just couldn’t get the  right lyrics. In Ghulam Nitin Raikwar was an assistant.  He came  up with the  idea  of Aati kya khandala.He is very talented and lively. We composed a tune and asked  Nitin to write the lyrics. Nitin came up with Ae kya bolti tu.”

In the meanwhile Mr Perfectionist  was  getting ready to sing. Recalls Laltit. “Whenever Aamir  would drop in to  discuss  the song Jatin and I would make  him sing any  of his  favourite songs  so we would know which notes he  was comfortable in. We discovered he was okay in 4-5  notes. The  higher notes, he  avoided. I made a note of  Aamir’s range and  composed  the song within that range. If  you listen again to  Aati kya khandala you will see it is more  talk than sing. It  was  more about attitude than singing.It’s  not about gayaki  but  about  Aamir’s  range.:

The tune  was  a smash-hit in the Ghulam  team. “When we played   the song everyone including  Mukesh and Mahesh and  Vikram  loved  it. Aamir liked it too. But he  said he will  sing it only when he was fully  comfortable. His okay  was the last step.He made us promise that no one in his family would  get to  know that he was singing for  Ghulam, as they never thought  of him as much of a singer.Aamir   consented to  give us time to rehearse the song with him but  the appointed time  had to be  according to his convenience. Aamir was very busy, so were Jatin and I. Aamir would come very late in the night to rehearse for  the song,around midnight and then we would rehearse  for around 90 minutes with the perfectionist each night.”

It was then  time to record the  song. “When  it actually  came to recording the song, Aamir  sang the whole song in  just 30  minutes. I am  not kidding. He was that prepared after  rehearsals. And can  you believe  he was nominated  for a Filmfare award for singing??!!”