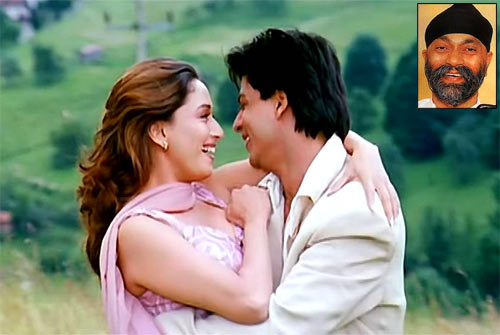 There is much more  to  Uttam  Singh than  Dil Toh Pagal Hai. Uttam Singh along with  his partner Jagdish gave  soulful songs in Manoj Kumar’s Painter Babu and Waaris. Uttam and Jagdish were  the regular  music arrangers  for Raamlaxman After  Jagdish’s death  in 1988 Uttam Singh struck gold on his own when  Yash Chopra invited him to score music in  Dil Toh Pagal Hai. This was followed  by triumphant tunes in   Pinjar and Gadar Ek Prem  Katha. A  sample of   Uttam’s   atti-Uttam  repertoire.

1.     Kab talak  shama jali yaad nahin(Painter Babu):  A  film by Manoj Kumar always meant extraordinary  music. When the  movie moghul  chose  Uttam and Jagdish to do  the music for Manoj Kumar’s brother Rajeev Goswami’s debut,  eyebrows were raised.   Belying  all skepticism Uttam and Jagdish came  up with an  epic score  with Lata Mangeshkar  helming 5  of  the 7 songs. Of them my pick is this  undulating pain-lashed number about the dying embers  of  a fugitive love . Lataji sang with Manoj K’s favourite male voice  Mahendra  Kapoor. She  went  on to make hits out  of  many of Uttam Singh’s compositions.

2.     Mere pyar ki umar ho itni sanam(Waaris):  Smita Patil’s swan song had many a  swoon song  including  the duets   Ghat chaa rahi hai(Lataji-Suresh Wadekar), Husn ki wadiyon mein(Lataji-Kishore Kumar). My favourite is  this  dishy duet by Lataji and cinematographer  Manmohan Singh where the feeling of an open-air freedom assails  our senses. This was  Uttam and Jagdish’s last important soundtrack  together.And what a treat.

3.     Main  hoon yahan(Kabrastan):  Proof of how  much Lataji supported  Uttam Singh  lies in this song,  a haunting melody  recorded  for a C-grade  horror film. Lataji told me  how  she  never  questioned  Uttam Singh about the film . That explains  another  of her songs Zara   chal sambhaal ke aanchal ko (a  duet with Suresh Wadekar) in something  called Paanch Fauladi.

4.     Dil To Pagal  Hai:  Uttam Singh’s signature songs. 10  compositions , 9 of them  featuring Lataji who was Madhuri Dixit’s voice(Asha Bhosle sang Dil le gayee for Karisma Kapoor). My pick  of  the  lot is the title track  filmed on  Madhuri and Akshay Kumar. Apparently  Akshay agreed  to do the  guest appearance only because he was promised this song.

5.     Chitthi na koi sandes(Dushman): In my opinion this Lata Mangeshkar/Jagjit Singh tandem is  the  best composition  of  Uttam Singh’s career. Heatbreaking in  its poignancy, soulful and searing, Anand Bakshi’s lyrics are  incredibly emotional. From the two version of the  song it’s hard to pick a favourite.

6.     Ghar aaja pardesi(Gadar Ek Prem Katha):  An even bigger hit than Dil To Pagal Hai,  Udit Narayan’s  Main nikla gaddi lekar  is  an all-time hit. But  my favourite is this  Udit Narayan-Alka Yagnik  beauty, so   filled with an aching  nostalgia it hurts.  Sadly not many people  know this to be  Uttam Singh’s creation.

7.     Haath  Choote/ Vatna ve(Pinjar):  Try not to  break down when  you hear Roop Kumar Rathod and  Uttam Singh sing this  moving  homage to homeland. Pinjar is filled with the flavours of  Punjab,pungent and  poignant. Uttam’s talented daughter Preeti Uttam   sings the soul shattering  Haath  choote with Jagjit Singh, a  Gulzar  creation about separation  in love. This is one helluva talented  composer.