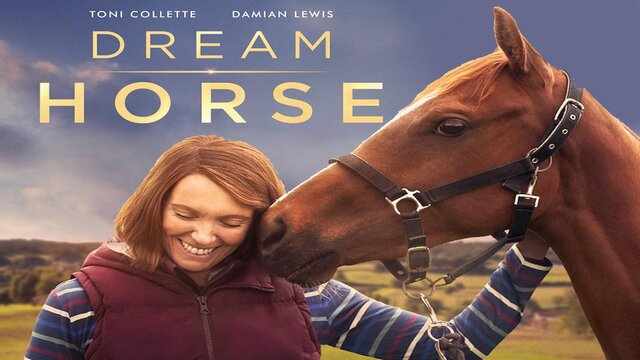 Predictable, though not in a blah way. That’s Dream Horse  a tiny pretty sweet and  tender film about  a group  of  over-the-hill seniors  in  a sleepy Welsh town who decided to  bring in some  excitement in their frozen  lives by  investing in a race  horse.

It’s a  simple sports drama with a  precise and unmissable message  of hope and  compassion, elevated to something more than an evangelical  exercise in pulpit  propaganda ,by some  excellent actors  who  believe  in the prevalence  of hope and goodness  even in the dreariest  of times.Also, the  sedate energy(if  that makes any sense) whereby  the tranquility  of the  milieu  is never pierced  but stirred,  adds  to the feeling of watching a film with not  a single insincere bone in its body.

It all begins with bartender  Jan Vokes(Toni Collette who looks like anything but a  bartender)  investing her  hard-earned  savings in …no not a vineyard , but  a  mare. She then  decides to  ask retired townsfolks to  invest in the  scheme to take  the  horse to the  races.

Besides Collette who  is  razor-sharp with  her grit,  wit  and  passion, there  is  the wonderful  Damian Lewis as  a middlaged man in a  placid marriage wasting his  time working in  front  of a computer.His awakening into a state  of  excitement is  accompanied by his unsympathetic but  not unkind  wife (Joanna Page) ’s realization of how little she  knows about her husband’s disappointments.

Also Read:  Did Bad  Reviews For Kagaz Ke Phool Kill him Or  Was Unrequited Love The Reason For Guru Dutt’s  Suicide?

These are  characters in  the winter  of their  lives  looking for  some spring in  their  gait.  Director  Euros Lyn lets  the  vast cast introduce itself to the audience. There is  none of that common  directorial   anxiety as  to how  the audience  will  keep up with the  head count. The  broth   of  collective  bonhomie bubbles happily, allowing us to sink  ourselves   into the  inspirational yarn  effortlessly.

Some  of  the   leaps  of faith are  achieved a little hurriedly,  perhaps  to keep the proceedings on a tight leash. For  example,  Jan’s husband(Owen Teale)  is an indifferent sloth the one minute, not paying any attention to what his wife is saying. The  next minute he is right beside her  , selling  her  equestrian  to prospective  buyers.

Right. Everyone has  the  right to dream. Dream  Horse, which was earlier  made  into documentary , digs  into a real-life incident  and  comes up smelling with  roses. By the time  the  last triumphant  race happens the  question, derby or not  derby, has been duly answered. You will   smile and  sob as the horse named Dream goes through  its journey from hope to near-calamity to rise again. As it gallops to  victory, so does the  film.

Dream Horse may  not spur you  into standing up and cheering. But it will  most certainly make  a tingle  run up your spine with it message of hope that is at once  endearing and supine.