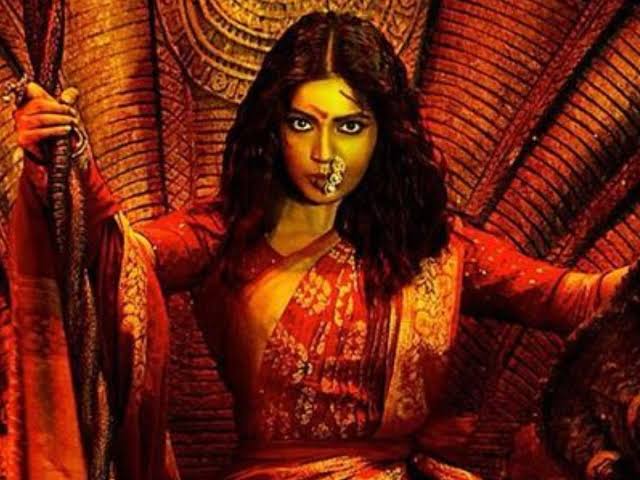 One  of  the producers  of Durgamati is credited as  ‘Cape  Of Good Hope’.  Any hope  of  good cinema is  dashed  to the ground  while viewing the trailer  . Durgamati is  loud screechy strident in tone  and  utterly  bogus in intent. Worst  of all it  seems  to  shamelessly promote blind faith  , with the  heroine  Chanchal Chauhan (Bhumi Pednekar looking as empowered as a village priestess called  to exorcize  a stubborn spirit)  playing  an imprisoned murder convict,  transformed  into  some kind of a deified incarnation.

Who thinks  of  such nonsense  in today’s  day and age? Do the  gold diggers who exploit  the Indian craving for ghosts and supernatural  experiences  know  how we look when films such as  this, with  the  characters  being tossed around   by invisible  forces, none more so than the  director.

Come on. This is  the  21st century .And we are still making film about ghosts and witches? The tone of narration seems  as awful as in  Laxmii the last excursion into eeriness that dampened  and demonized our  Diwali spirit. . We  have barely gotten  over that experience  in occultism when this one shows  up.

Durgamati is  more  weirdness than we can  take.Everyone is seen hamming.Actors like Arshad Warsi(“Power  of  people far  more  important  than people  in power,” his politician  character  proclaims  pompously ), Jisshu Sengupta(in a Khaki uniform trying to look self-important) and above all Bhumi Pednekar are seen behaving like actors in a schoolplay trying to be heard  in the last row.Who acts  like this is  today’s day and age?  Who makes such films? Most importantly, who watches them?