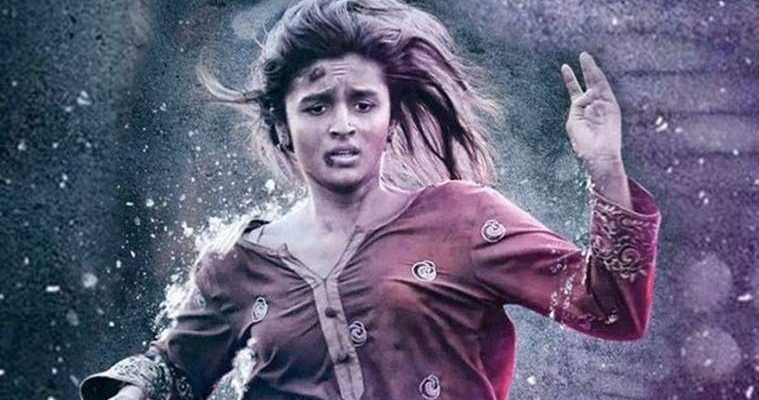 Who thinks of such a story to tell?! Only a  mind that is either supremely screwed-up  or stunningly sorted. In director Abhishek Choubey’s case, I’d go with the latter.

Udta Punjab is a work of  contemporary art  so audaciously unprecedented in its vision and execution of a subject that is topical and timeless , you wonder if Bollywood, as we love and hate it, is finally growing up.

On the other hand lest we forget,filmmakers in the past  like Bimal Roy, Guru Dutt and Gulzar constantly prodded and pushed mainstream Hindi cinema into areas of darkness, not fearful  of the unlit interiors of the human heart.

Abhishek Choubey takes forward to an altogether new high ,  the politically empowered human drama of Bimal Roy’s Do Bigha Zameen(the migrant’s plight in the city ,as played out by Alia Bhatt’s character) and Gulzar Maachis(Punjab, bloodied battered and wounded, no more romanticized ).

I use the term ‘high’ quite deliberately. At least one of the film’s four protagonists , the subversive rock star Tommy Singh is zonked out of his mind most of the time.So is the hauntingly persecuted Bihari migrant Pinky, the reluctant drug addict pumping her veins with dubious drugs to numb herself against constant violation.

Shahid Kapoor and Alia Bhatt are born again as they play the two traumatized  characters (at one point he stares at his ravaged reflection in a toilet bowl, she bawls her messed-up head into a well) journeying from the opposite directions of the moral scale .And yet their pained lives converge at one point in a strange unexpected and life-changing encounter.Both actors bleed brilliancy into their roles, bringing to the screen an electrifying authenticity with their sheer understanding of the complexities that define the drug politics of Punjab.

No  actor in Udta Punjab plays his or her part in isolation. Everyone contributes persuasively and comprehensively  to the director’s grand design whereby “reality” is transmuted into a kind of cinematic language which we have never experienced before. And I don’t mean the profane dialogues, of which there is no dearth.Sure, the characters barring Kareena Kapoor Khan’s doctor Preet Sahani who is immunized against the filth of  moral debasement, talk dirty. Somehow their language is so much in keeping with their characters, we stop flinching to their ma-bahen fussilade 15 minutes into the film.

There is so much to appreciate in this amazing film, the unparliamentary language becomes the least of the take-aways. Specially impressive are the Punjab locations and the way they are shot and fitted in with incidental music and sounds that appear to demolish and break down the distance between the director’s vision and the audiences’ perception. Meghna Sen’s editing is razor-sharp. It allows the depraved disoriented people in Choubey’s film to open up their minds and emotions just enough for us to get a vivid glimpse into their troubled lives .

Though the playing-time clocks at 2 ½ hours, the burden of the duration is never felt by audience.

This time, the creator of the chaotic world of moral compromises takes full responsibility for his actions. Director Abhishek Choubey looks at the wound-up characters in all their emotional nakedness, staring at their exposed lived without pity anger or revulsion.

For the audience it is hard to look away from the realm of brutal self-interest built around the renegade  characters. It’s specially heartbreaking to see what the script has in store of Alia Bhatt’s character. But then , this is no country for the week and infirm. Udta Punjab is not only about Punjab  and its drugged youth. It is also communicates with furious fluency a far-reaching statement on our wounded civilization which thrives on inequality, injustice and exploitation.

The complete breakdown of the moral order and the subversion of law and order, are issues that govern the characters’ lives, twisting and changing their destiny in cruel ways.

Also Read:  Toofaan  Gets The Thumbs Up From The Audience

Amongst all the devastation and decimation of humanism Udta Punjab gives us flash-moments of redemption and enlightenment. For the debauched rock star Tommy Singh it comes when thrown into jail for his obscene antics. There,he meets his fans ,one of whom has just killed his mother when she refuses him money for drugs. The incident awakens Tommy’s conscience . He is ready for the change.

For the corrupt cop Sartaj Singh(played with persuasive sardonicism by Diljit Dosanjh) the moment of awakening comes when he meets the spiritually and well, just, literally beautiful Dr Preet Sahani. Kareena is   perfectly cast in the part and so at home playing the seductive saviour-angel that when Diljit looks at her adoringly and says she is perfect, we know exactly what he means.

Two love stories , one redemptive the other tragic,grow out of the desperate crisis in the plot, leading the screenplay through a maze of haunting and  hilarious incidents that leave us exhilarated and exhausted.

Udta Punjab is replete with   encounters where strangers meet and strike up a rapport that changes their lives. Understandably this is a film that changes the audiences’ life too. No sensitive rational viewer can come away from this experience without in some way feeling transformed.

Feral Frenetic, riveting,hypnotic, hallucinogenic and altogether incredible we’ve never  seen anything quite like  Udta Punjab before.

An Interview with  director  Abhishek Choubey On  The Release  Of Udta Punjab after  along battle with the censorboard.

Now that Udta Punjab(UP) is finally out what are your feelings?

Relief, joy, calm and a sense of achievement.

Do you feel triumphant  about your victory with the censor board?Triumph is too big a word.I wanted to focus on the film somehow being released on the 17th Of June. That was very important for all of us. If we had not met our release date I’d have felt defeated.

The honourable High Court bypassed the censor board to release your film. Now even the sex comedies  with  filthy phallic jokes can go straight to the courts if the censors object?

The censor board has a terrible responsibility, and a completely thankless job. There is always going to be filmmakers who are going to indulge in cheap titillation and try to sell cheesy ideas to  make money. I agree, when a film like Udta Punjab is given the freedom to have its say other filmmakers may demand the same.There is the ‘Carry On’ series which has cheap jokes about women’s anatomy and so on. How do we stop these?

The profanities in your film do not offend?

That’s because those lines were not put in there to titillate. That’s how the characters  speak.

Your last film was a Muslim Social Dedh Ishqiya. How did you suddenly jump to a film about the drug menace in Punjab?

How did Punjab come into the picture?

Initially there was no Punjab in my film. I just wanted to do a film on drug abuse because  it was a problem that bothered me.I had seen from very close quarters what drugs could do.

Have you ever tried drugs?

No, nothing major. Maybe marijuana. But I’ve seen friends in college fall victim. The drug menace is all around us. But no one was talking about it in our cinema.Apart from whispers at high-society parties no one really bothered. That bothered me.I read up on the subject. The information I gathered was very incipient. It was after this that we moved our plot idea to Punjab. Because the problem of drug  abuse is acute in Punjab.After that  everything fell into place.

How much time did you spend in Punjab researching on the subject of drug abuse?

I was there for some months. My co-writer Sudip Sharma went much before . He met lots of people. Later I joined him and we met many health experts, drug victims and others related to the issue.

The data provided by your film that 70 percent of the youth in Punjab are drug addicts has become contentious?

All the data are easily available to any who wants to check it on the internet.We also depended on various other sources for our data such a comprehensive piece on Tehalka. When the trailer came out there were questions on the statistics. But we were very clear on what we were doing. There is a problem in Punjab.We said, ‘Let’s make a film on it with stars so that people will listen to us.’ This is the reality. This is what is happening in Punjab. And this is our small contribution to creating an awareness of the situation.

The casting in Udta Punjab is impeccable. How did  you decide  to interweave four main lives into theme of drug abuse?

If you look at  the problem, those affected by it are the healthcare specialists.I’ve one played by Kareena Kapoor Khan. Then  there are the families of drug addicts. Diljit Dosanjh plays a cop whose brother is an addict.Then we have the drug addict themselves played by Shahid Kapoor and Alia Bhatt. We wanted to show both the victims and the people affected by those who are drug  addicts.

How did you get Shahid Kapoor to convey so much madness as Tommy Singh?

When I narrated the idea to Shahid he was immediately excited.Of course the quality of madness was challenging for him. We had to walk a  thin line between Tommy Singh being wild  and obnoxious. But I’ve to tell you I was surprised by how eagerly he grabbed at the character.He loved the character’s journey from self-indulgence to self-actualization.Tommy realizes he is in some way responsible  for youngsters doing  drugs.But addiction has made  him terribly broken and empty inside.

And Alia Bhatt . How traumatized was she playing her traumatized character of a Bihar migrant in Punjab who is captured and enslaved?

Extremely traumatized.So much so that on the day she finished shooting she ran into her van and let out a   whoop of joy and relief(laughs).She became herself again. Alia had to go through a lot in playing the character. We had to be careful about how far we could go in showing her trauma.

You may have been careful. But what we see  still comes across as an extremely brutal depiction of a society that has lost its compassion?

Our first draft of the script was  much more brutal.In the subsequent drafts we toned down the brutality to make it more palatable to a  mass audience, though with Alia’s character we couldn’t water down the brutality without lessening  the impact.But yes, we were aware that we wanted to make a mainstream film,hence the love story between Shahid and Alia, though even that love story is not without a sub-text. You see,  drug addicts feel unloved and isolated. They tend to drift towards  one another.

Diljit Dosanjh as the Sikh cop is the quiet achiever in the cast?

Casting Diljit was a brainwave.We needed a Sikh actor but one who allowed us to move away from the stereotypical depiction of  Sardarjis in films. Diljit has the range to carry it off.

Apparently all the principal actors took a pay cut ?

Yes,that’s true.We knew this was not a  big-budget blockbuster movie. Yet we wanted and needed stars .We needed to spend as little as possible.We had to shoot within stipulated number of days. All the actors were willing and they surrendered without hesitation. They made the film possible.