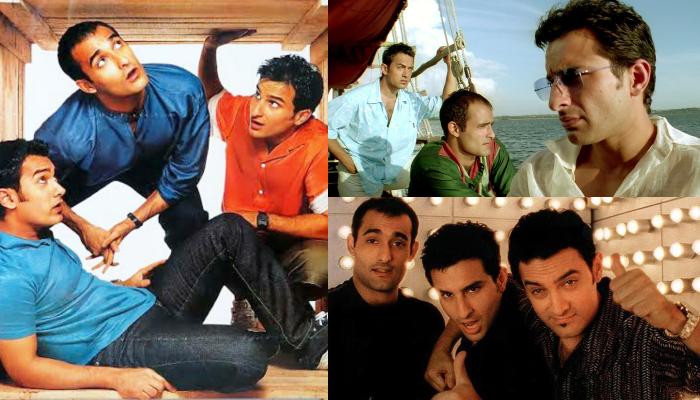 When I first got to know Farhan he had just released his directorial debut Dil Chahta Hai. The nation and its biggest critics celebrated the birth of a striking director. We were all bowled over by the freshness of Farhan’s cinematic vision and dialect. As the nation fawned, Farhan remained calm. His equanimity remains unscathed over the years.

1.     Initially  when  everyone saw this  soon-to-acquire-cult-status film  it seemed the film had sought  inspiration from  Joel  Schumacher’s St  Elmo’s Fire.  Which is  like  saying   Sholay  was  inspired by  Bindiya Aur Bandook. Over the  years the  Elmo angle has evaporated and  Dil Chahta Hai is looked in  as  one  of  the  most influential films  of Indian cinema. Regarded by many movie buffs as the ultimate dosti film Farah Akhtar’s directorial debut depicted the dosti among Aamir Khan, Saif Ali Khan and Akshaye Khanna with a lived-in authenticity. The language was colloquial and conversational and the attitude oh-so-cool.

2.      Dimple’s Tara  Jaiswal  in Dil Chahta Hai, is a very distant, though very deeply bonded, cousin of Meena Kumari’s choti maalkin in Sahib Bibi Aur Ghulam.Desolation shrouds both characters. An alcoholic haze endows their personality with a glazed grace. Like Meena Kumari in Sahib Bibi Aur Ghulam, Dimple’s character moves closer every minute to doom with such dignity that we almost welcome the tragedy as a counterpoint to the ongoing bacchanalia that characterises the central relationship among the three friends.

3.     From among the many tirelessly tender sequences that spill willy nilly out of Dil Chahta Hai, the one that’s most representative of debutant director Farhan Akhtar’s assumptions and motivations as a filmmaker occurs in the Sydney-half of the film.We see the jaunty and roguish Akash (Aamir Khan) coming out of a theatre with Shalini (Preity Zinta) and her affable and rather embarrassingly young Uncle.They’ve presumably seen the Michelle Pfeiffer-Harrison Ford starrer What Lies Beneath. That’s what the banner at the movie theatre announces. As the Uncle (model Rajat Kapur), looks on with amusement, Akash dismisses all love stories as humbug. Shalini loses her cool completely. “I’m sorry I brought you to see this serious film. I think only flippant films with lots of action are suitable for you

Also Read:  Sunny Leone: "I am in my 30s and that is where I  shall remain for the rest of my life"

4.     Dil Chahta Hai is a lesson in naturalism. The authentic locations, characters, performances, lighting and, last but not the least, the sync sound favour the flavour of arcadian authenticity.This is a product of Feelgood Cinema with a depth that defies the genre. It entertains us immensely, but also nourishes our senses beyond commonly acceptable definitions of sophisticated entertainment.But for me the film ends when the three friends sit on the wall of Tara’s compound and watch her belongings being taken away. There’s so much silent finality in that sequence that you wonder why Farhan extended it into a Goan reunion sequence where the grieving Sid suddenly rediscovers love just six months after Tara’s death in the form of a strange calendar-art model-like woman.Yes, life goes on.But we would rather remain frozen in the dreamscape of friendship, heartbreak, repentance and reunion that Farhan Akhtar has created in Dil Chahta Hai.