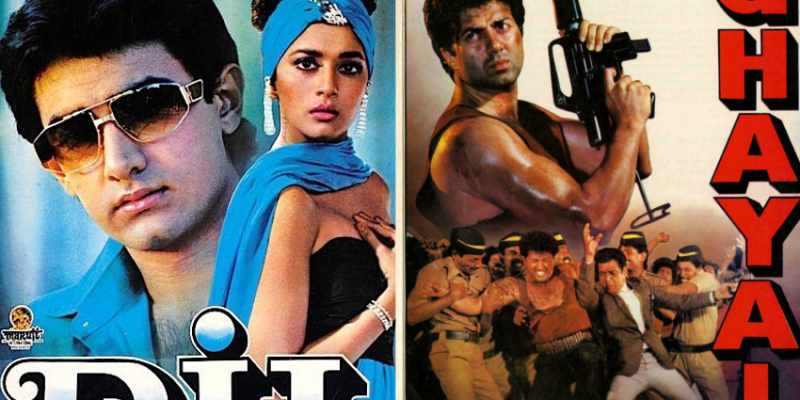 On June  22, 1990 Raj Kumar Santoshi’s Ghayal and  Indra Kumar’s Dil released simultaneously, much  against  the  advice  of   boxoffice experts  who  thought  it was suicidal to release two potential  blockbusters side by side.Miraculously  both  worked wonders at  the boxoffice. One  more than the  other.Here are  some facts about the two simultaneous  blockbusters.

1.     Ghayal was definitely  a  much better  film  than  Dil. But Dil was  a  bigger  hit. While Indra Kumar’s  film occupied  first position at  the boxoffice, Raj Kumar Santoshi’s film was the second  biggest hit of 1990. Ghayal  received several popular and National awards. Dil didn’t get any awards.

2.     Ghayal was Raj Santoshi’s directorial  debut. It  was a  routine revenge saga carried  to  an unexpected  level by the  high quality  of  action. Santoshi  went on to  direct Sunny Deol  in two other outstanding  films  Ghatak(which was to originally star Kamal Haasan) and Damini. After these they had a huge fall-out.

3.     Like  Ghayal, Dil  too  was  a diectorial debut. Indra Kumar’s first  film as director, he  later collaborated  with Aamir  on Ishq and Mann. After which, Aamir moved on. The actor once told me  he was  proud of  all  the films he has done including those with  Indra Kumar and Dharmesh Darshan as they are  part  of his journey as an actor.

4.     During  Dil Aamir and  Madhuri had a fall-out when Aamir played a  prank on her.  He pretended to  “read” her palm and  then  spat on it. During  Indra  Kumar’s  Ishq Aamir played  the  same prank on Juhi  Chawla. They didn’t speak for years. Is there a  connection between  Aamir, Indra Kumar and  spitting?

5.     The  music  of Dil by  Anand-Milind ranks among the largest-selling albums  of  all times  . The songs Mujhe  need  na  aaye  and  Oh priya priya(originally composed  by Ilayaraja) were  chart smashers.  Ghayal(music by Bappi Lahiri)  didn’t have a single outstanding song. The music  was the main factor for Dil racing ahead  of  Ghayal.