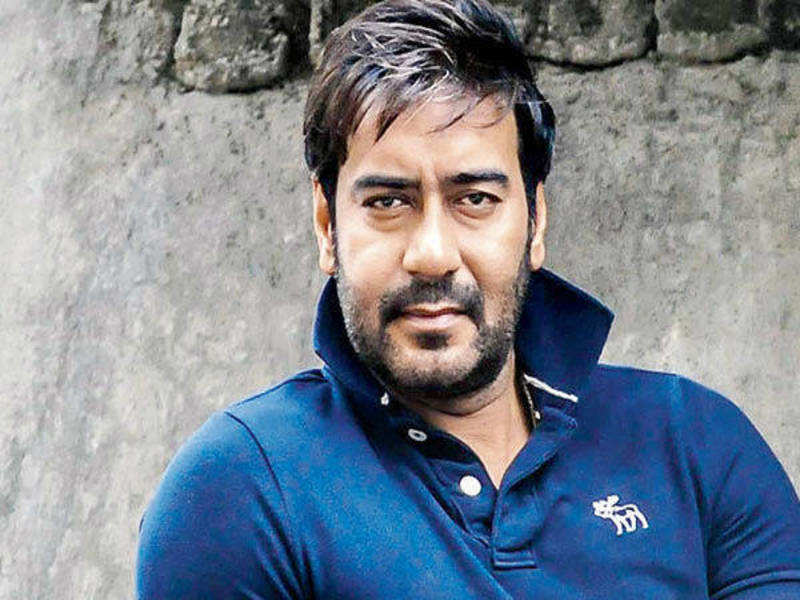 All his life Ajay Devgn has been a warrior. He would rather kick ass than lick ass.Ajay Devgn’s father Veeru Devgan is one of the leading action directors of Bollywood. Ajay inherited  the penchant to kick ass from his dad.

From balancing between two motorcycles in his maiden film Phool Aur Kante  to balancing two women  in  his latest release De De Pyar De … that’s Ajay Devgn for you. Quietly accomplished, and quite accomplished, thank you! He first made his screen appearance astride two motorcycles in Phool Aur Kaante in Kuku Kohli’s film and since then Devgn has learnt to effortlessly stride different kinds of cinema without making a song and dance of his versatility. If on one hand he plays the smirking villain to vamp Aishwarya Rai in Khakee on the other hand he’s equally home playing her shy lover from the past in Raincoat. His directorial roster includes everyone from Prakash Jha to Kuku Kohli.

True, he doesn’t have  the support of  the Chopra-Johar  group  of powerful filmmakers in   Bollywood  But Devgan has managed to  make his place without depending on the brand-name directors. “I don’t put labels on films and directors. To me  every film  I do is important. And whether it’s Prakash Jha, Mani Ratnam, Ram Gopal Varma  or Kuku Kohli I value  every assignment. But let me  clarify. My life and career don’t depend on any one project.” The easygoing attitude is seen as a part of  Devgan’s don’t-care-a-damn career strategy.  But that he doesn’t care about his profession is a fallacy. Devgan cares. But he doesn’t believe  in playing games of oneupmanhip. “What’s mine will be mine. What isn’t was never meant to be,” he mumbles.

Unlike other media savvy stars Devgan isn’t comfortable giving interviews. To pin  him down  is almost an  impossibility, and it isn’t only because of   his innate  diffidence. It’s  also to do with his constantly changing cellphone number. Let me add here that there are some stars like Aishwarya Rai, Akshay Kumar and Kareena Kapoor whose  phone number remains unchanged forever. On the other some stars like Preity Zinta and  Priyanka Chopra   change their number so often you probably need a radar  to keep track of them

Devgan belongs  to  the ilk of constant change. When asked he says, “I hate talking on  the phone. In fact I don’t like to speak unless necessary.” And yet this strong and silent brooder is capable of tremendous fun. The late and much-missed Rituparno Ghosh would be in  tears as  he   was at  the receiving end  of innumerable  pranks  from the devilish Devgan  right through the making of Raincoat. The actor’s  collaborative spirit,   his ability to connect with his favourite filmmakers(Raj Santoshi,  Prakash Jha, and now Rituparno Ghosh) as more than just an  actor reaching out to a filmmakers, is astonishing. Sanjay  Leela Bhansali who  has extracted Devgan’s most finely-tuned performance to date in Hum Dil  De  Chuke  Sanam carries  warm thoughts  on  the actor’s ability to connect with his  role and with  the larger picture in general.  “After playing the brooding intense all-giving  husband in  Hum  Dil De Chuke Sanam he could’ve been my Devdas easily. But I  didn’t want to repeat myself as a director and neither did he want to do an encore as an actor,” says Bhansali. Devgan’s next level  as  an   actor came in Ram Gopal Varma’s Company.  The director harnessed  the actor’s languorous personality to play the pondering underworld don to great effect.

It’s a pity that neither Hum Dil  De Chuke Sanam nor Company got Ajay Devgan any awards. Those came with Santoshi’s The Legend Of Bhagat Singh. Very frankly Devgan was totally miscast as the historical figure. Lacking both the fire and  the aching youthfulness of Bhagat Singh Devgan projected an incongruous indignation   into the historical character. Bhagat Singh  proved that Devgan needs to stop making languor a  fashion statement in  his performances. He is certainly a  lazy actor . But one capable of arising from his slumber with startling moments  of insight into human nature. We saw this quality in his performance as it emerged in Hum Dil De Chuke sanam, Company and moments of Gangajal. Married to firebrand Kajol , Ajay Devgan has little to do with her close friends Karan Johar, Aditya Chopra, Shah  Rukh Khan and Manish Malhotra.  It’s erroneous to think Ajay “hates” his wife’s friends. He just doesn’t connect with them. He doesn’t even try.

I remember  Ajay’s debut  film Phool Aur Kante  was released on the same day as Yash Chopra Lamhe 23  years ago. Everyone made disparaging comments about  the former, and its lean and gawky hero. No one except  the astute Jaya Bachchan had seen star quality in Devgan. Today  as he prepares to go to another level of his career Devgan can look back with  considerable pride at the oeuvre he has created as an actor and as a producer.  So  what if he lost crores on his hi-tech children’s film Raju Chacha which Ajay’s cousin  directed? And so what if  his dad action-director Veeru Devgan directed another fiasco Hindustan Ki Kasam for  Ajay the producer?  At least he  made films  from the heart.

Ajay Devgn did not make his debut in Phool Aur Kaante. Long before that he played the child version of Mithun Chakraborty’s character in Bapu’s Pyari Behna. Ajay was billed as ‘Master Chotu’.He  won the National award for Best Actor twice for Zakham and The Legend Of Bhagat Singh.

Ajay’s  best performance to date was  in Sanjay Leela Bhansali’s Hum…Dil De Chuke Sanam where he played Aishwarya Rai Bachchan’s husband .The two hardly interacted during the shooting. Later they did an awful David Dhawan film Hum Kissise Kam Nahin together and Rituparno Ghosh’s Raincoat. and hit it off . Ajay was the first person Abhishek Bachchan told about his marriage plans outside immediate family.

Ajay Devgan was the first choice to play Bhansali’s Bajirao in Bajirao Mastani. They couldn’t agree on the star’s remuneration.He shares a lot with his buddy Rohit Shetty. Both are sons of well-known action directors. Ajay and Rohit attended the same birthday parties as kids.

After Devgn’s debut in Phool Aur Patthar in 1999 Abhishek’s mother Jaya Bachchan was the only one who had predicted that Ajay Devgn would be a superstar.Devgn’s debut defeated Yash Chopra’s Lamhe at the boxoffice.      Devgn can’t get along with the Khan superstars, specially Shah Rukh Khan who is Devgn’s wife Kajol’s favourite co-star. There is no friction at home over Kajol’s loyalty. She would happily give up her friendship with SRK for her husband’s sake.She distanced herself from buddy   Aditya Chopra when her husband warred with the Chopras.Devgn demands unconditional and complete loyalty from those close to him.And he gets it. Not  by force.  But  for what he  is : mature, mellow ,motivating and  successful on his own  terms.