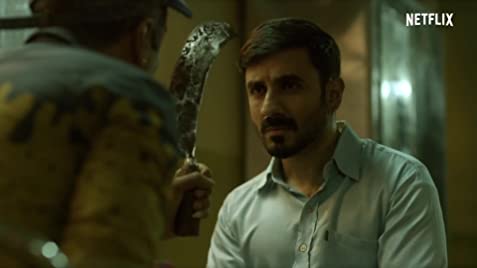 No, a shot of  that strong beverage won’t do. Something far  more potent…like  murder perhaps?

It is  a tempting premise for a  crime  thriller. Something like Sonam Kapoor playing a couture  queen who kills  to  kill it  on  the ramp.And Vir Das , who really should be  seen more  often,  simply nails  it. He is  an  innocent,  virginal wannabe  comic virtuoso bullied by his abusive  uncle, and  sexually molested by his aunt who gropes  him while he makes the tea.Chai-ld abuse?

Biggest  bully of all is Manoj Pawa(in an  obscenely ill-fitting wig)  and  he, unwittingly, becomes Hasmukh’s first murder victim.Pawa  becomes  the  ghost at Hasmukh’s burlesque banquet.

This is dark humour at  its darkest. Hasmukh’s wretched  unhappiness is  on  a level of the Joker. He  either  kills in  frustration  or gets killed.As  simple(?)as  that!  From this  distracting takeoff point, Hasmukh builds into a  savagely  sinister crescendo  of  repression and  comeuppance.  I have to admit that the episodes got unwieldy as  they progressed. The tv channel in search of  TRPs steps in with all the sublety  of a  sledgehammer negotiating a head pinned  to the wall. Ravi Kissan is  a fine fusion  of farce and ferocity as the channel head.  He reminded me of Jackie Shroff in  Goldie Behl’s film Bas Itna Sa  Khwab Hai while Kissan’s  assistant  (Amrita Bagchi)  is  a distant akin of Sushmita Sen  in the same  film.She  swings between being a  Good Girl and a Badass Babe. Take  you pick.

Vir Das’s guileless giggle giver’s persona  beguns to  wear thin as  he  goes on a killing spree one  episode at a  time, as  if following a  self-discipline  routine. It doesn’t get better just because his victims are  all  sleazeballs .What  I found more  convincing was Hasmukh’s rivalry  with  the other stand-up comic KK(played  by Suhail Nayyar). In a lengthy sequence towards the end of  the  plodding  journey, KK drunkenly declares himself a loser. It’s  well-performed monologue, and one that  makes us alert to  the  series’ failings with the character’s feelings.

We  never know why Hasmukh feels the way he does about his comedic abilities being tied to  crime. There is  a romance towards  the end with a foreigner,a love  interest which is  of interest  to no one, not even  Hasmukh  himself.  His failings as a human being are so broad, they leave no room in us for empathy.  Still, Vir Das keeps us watching till the end. I wanted to feel for Hasmukh because he  was played by an actor who understands failure and knows how to handle  it better than  Hasmukh.

Accompanying Vir Das’s Hasmukh on his  killing spree is his friend and manager  Jimmy,played by Ranvir Shorey who never fails to succeed no matter what the character.Das and Shorey  play off each other in a  balanced conflict that the  plot  on the whole lacks. The narrative wobbles. Das doesn’t.