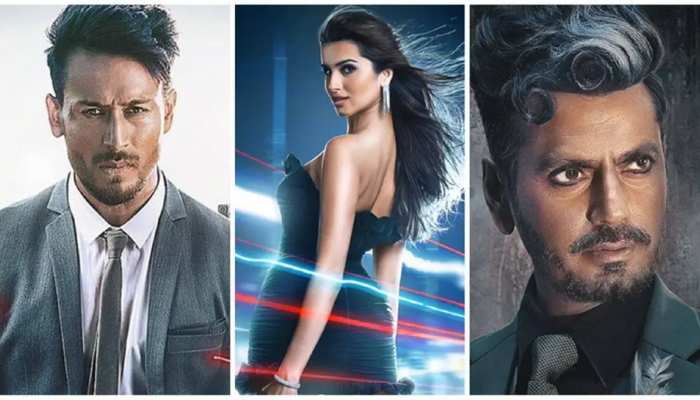 What were they thinking?  Or were they thinking at all when  producer Sajid Nadiadwala’s  highly-paid  team of  ostensible  professionals  sat down to write this  junkfood for the  demented masquerading  as a  motion picture?

Since this vomit of  a  film throws many  challenges  at its character, let me throw one  of my own: I challenge you to sit through till the  end  of this monsterpiece. Ahmed Khan’s  Heropanti 2 is not even a film. It is a chaotic  circus with every actor trying to outdo  the  rest  in the field of  expert hamming.

Amrita Singh as  the hacker  hero Babloo’s mother wins  hands-down. She  even makes  Nawazuddin Siddiqui’s  cackling villainy look restrained. And that’s saying a  lot , considering everyone seems to be on some mysterious drug. Director Ahmed Khan is so zonked out he can’t tell the difference  between  cheer and jeer. There were many sequences in  the film that were supposed to  serious. We end up laughing in them. It  is the only way to escape the sense of growing helplessness, anger and bitterness that creeps  up on as we watch tons of  money being blown up on a plotless  brainless  witless clueless trash  that makes us look like  fools  on the global platform.

Also Read:  5 Reasons Why Jugjugg Jeeyo Is Likely To Be A Big Hit

But  does anyone care?

Coming back to  Rajat Arora’s  scream-play  there is  a sequence where Amrita  Singh just barges into the  villain’s home  with  a marriage proposal for her son Tiger Shroff.Oh, didn’t I tell you?  Tara Sutaria playing  a cross between a  stalker and  a stripper,  is the villain’s sister. No matter what the occasion she  is  dressed  to  exhibit her  physique while her  brother seems  to be  a cross between  a  sadist and a  crossdresser.

Everyone  in Heropanti 2 seems to suffer  from an identity crisis, none   more so  than the film’s makers who seem monstrously muddled in their motive for making this  film(which is  not really a  film).Even A  R Rahman’s  music sounds derivative,the most melodious riff  comes from Laxmikant-Pyarelal’s Hero.

Is it because they want to mock the audience?  Or is there something deeper here that we did not quite understand? Maybe  Heropanti2 is trying to tell us   something that  we  desperately need to know  about what commercial Hindi  cinema thinks of  its audience.

Forget Heropanti. This is  chutiyapanti.