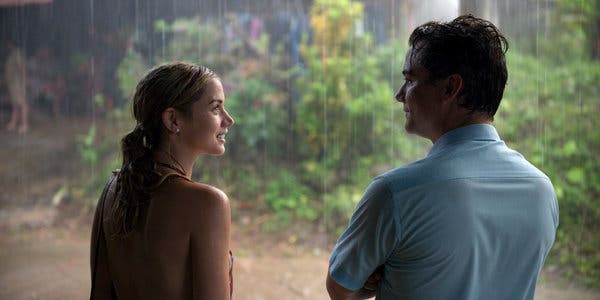 This is a  film with the body  of  Kathryn Bigelow and  the spirit  of  David Lean. On the surface it is a true-life political drama  about the last three months  in the  lives of the legendary Brazilian  UN  diplomat Sergio d’Mello.The entire  film unfolds as he lies buried in a rubble  of  rebel  insurgency.

But dig deeper and it is  a  story of forbidden love  during impossibly   violent times in Iran when Americans were  trying to  establish their  supremacy in  the war-torn region.

Sergio comes across  in the film as a hero in the truest sense. Strong ideological  immovably  principled and sinfully charismatic.As played by the wonderful Brazilian actor  Wagner Moura,  Sergio is  a powerful man who knows the full  power that his personality exerts  on the politics of diplomacy.

If you’ve seen Moura’s  earlier work he would be found to be  unrecognizable in his dapper suits and graceful  demeanour.Director Greg Barker  who earlier made a documentary on Sergio d’Mello  obviously hero-worships his subject. In his vision Sergio can do no wrong. This is  not a bio-pic. It is a love letter  to the  cult of iconization where the  hero is a super-hero with  no  dull spots in the halo, no holes in  his cape, and no  flaw  on his character that a  bit  of  romantic background music can’t hide.

Sergio, we are told, is unhappily married. Hence he can break the  diplomatic protocol and  have a torrid affair with a colleague Caroline(Ana de Armis). Their love exchanges are borderline  corny with lines that sound like Shakespearean  rejects  from Love & Juliet. You know, the ones Shapkespeare’s wife must have laughed at when he used them on her.

The  romance hits  all the expected  notes but doesn’t get us all wound up and doesn’t tighten the space around our hearts   the way it did in David Lean’s   Dr Zhivago where  passion  prevailed in  times  of political pandemonium.

Sergio is just not  ambitious  enough to  serenade sublimity. But it has some   thoughtful  moments  of political manoeuvring and the landscape representing a devastated angry Iran in  2003   looks  authentic. If only  the heart of the landscape matched matched with  anxious passion  of the protagonists who seem  involved  more with convincing us of  their mutual  involvement than  expressing the  careless  joy of  mutual passion.