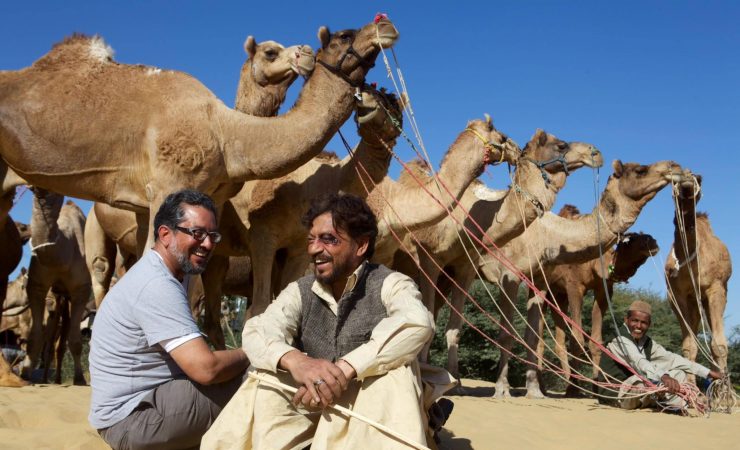 Irrfan Khan’s farewell film The Song Of  Scorpions will soon  release  in  India.And what a glorious  last hurrah  for an  actor who  had so  much more to give us!  It is an apt send-off  to Irrfan, one we would  like to remember him by, fable-like dark  ominous  rich in resplendent  emotions.

Director Anup Singh who  earlier  directed Irrfan in the expetional Qissa says   The  Song Of  The Scorpions  will  release  in  theatres  and on the OTT platform. “As this is one of Irrfan’s last films , I do hope it will leave the viewers moved and  they will cherish him in their thoughts even more.”

Anup says   Irrfan  had a ball shooting  in Jaisalmer.  “Irrfan said that it was the most joyous shootings  he’s done in years. At this moment, I’m working on the screenplay he and I were supposed to do next. Writing it, every word, dialogue, action, it still seems we’re working together. That gives my heart some contentment, eases the pain a little.”

Anup reveals he was planning something  very unusual with Irrfan next.  “After Qissa and  The Song of Scorpions, Irrfan often used to tease me, saying, ‘You’re always casting me, but your films really are all about women. When will you do a film with a man as the main protagonist in your film  and cast me?’ So, I spoke to him about the new film I wanted to do with him. I said, ‘Irrfan, this is a film about a man, but the thing is, he likes to dress up as a woman. In fact, he’s a folk dancer who dresses and  dances like Krishna’s Radha.”

Irrfan’s reaction to this unusual offer?

Anup laughs, “Irrfan  laughed so much, he had tears in his eyes. You know how he hated to dance! He said to me, You always bring me characters to do that I don’t want to and that I know I have to do. And now you not only want me to play Radha, but also to dance! I have to do this! When do we start? Alas, that  was never to be.”

The Song Of Scorpions also  stars  the  great Waheeda Rehman.

Anup says  it  was  honour to  direct her.  “Waheeda ji was grace personified, but she has a tremendous sense of humour too. However, what gave her real joy, other than the shoot, was travelling the Thar desert with her camera. As you might know, she’s an incredible photographer.”