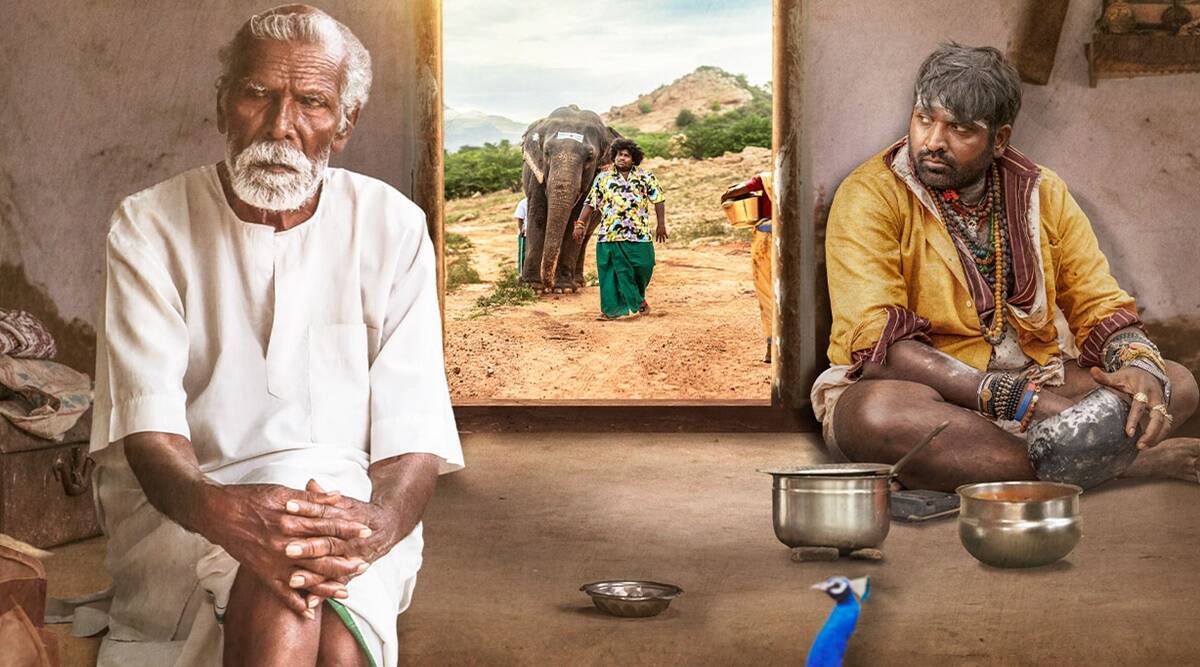 Director
M. Manikandan
Writers
Arivu,M. Manikandan,Ilaiyaraaja
Cast
Nallandi,Vijay Sethupathi,Yogi Babu
Plot
Kadaisi Vivasayi Preview: Maayandi, the only farmer in a village that has abandoned farming is charged with a petty case that leads to his imprisonment.

Kadaisi Vivasayi Movie Review: In telling the story of an aged impoverished farmer whose only concern in  life  is his  little  plot of land which he  tills  till  kingdom-come, writer-director K Manikandan has  assumed  a  tone of narration and a  texture of framing which  are  as  basic simple and unadorned as  the protagonist  himself.

80-plus  Mayandi(played  by  a real farmer Nalandi) leads an absolutely austere  life . There are no  adornments  of  any kind  around him. His life is his  plot of land which he nurtures like  a  child. The  fact that he can hardly hear makes Mayandi even more blessed-out in his  single minded devotion his farmland.

The tribal village where the  film is shot makes use of the local population to enhance the sense  of documentary rather than a drama,until Mayandi is summoned  to the local  police station for killing and burying a peacock in his land.

Through the police and court proceedings  Mayandi has  only one thing to say: “May I  go back  to my land?”

The presiding  judge, a kindly young woman (Raichal Rabecca Philip)  soon senses she in the presence  of  heightened  innocence that comes  naturally  only to those who are eternally wedded to Nature.

The  protective shield that she tries to  build around the  vulnerable old farmer is  never constructed into a convenient  melodrama.This  is a  film on the poetry  of poverty where austerity of expression and economy of execution are paramount.

Also Read:  Bhool Bhulaiya Marches On , Does Better In  Week 3 Than Prithviraj

What  I found a  little disconcerting is  the uninterrupted  sweetness and kindness that Mayandi generates  in those around him. All the villagers including old women , young  wastrels  and potbellied  cops have a  secret crush on Mayandi. Soon the  female judge too  joins the admiration club, personally supervising Mayandi’s release, expressing a filial concern about his health .

Towards the  end she flings  all professionalism aside and joins the villagers in their  ritual  celebrations. By the time we arrive at  this point in the  sparse story the  mood is  so  artless and  so filled with  a sense of reclaimed  heritage that it is  no longer  an issue whether the mood of realism is  buried under heaps of  fantasy.It is. But so  what?

Kadaisi Vivasayi   is  about  getting back to the  roots.And this is where Manikandan  scores  big. He  also serves as the cinematographer of his own  idealized  perception of Man and Nature  which  makes the task of identifying the  basic essentials of  the film’s main premise  easier to accentuate.

Manikandan  has  a marvelous support system in  the actors(most of whom don’t  even know what acting is) and technicians. Vijay Sethupathi brings in a stirring magic  surrealism as a psychologically disengaged wanderer  grieving for  love. His  story  could be a whole film in  itself.  I would have preferred Manikandan  to focus entirely on Mayandi.Yogi Babu with an elephant  by   his side is an annoying distraction.

Kadaisi Vivasayi is a  work of tremendous  elegance  simplicity  and emotional   integrity. It  doesn’t have a single  artificial bone in its body.Even the all-pervasive benignity that embraces the  mood  of the  narration, is  finally not an obstacle but  a reminder  that all you finally need  is love.And a bit of farmland.

Shabana Azmi On Her First Colour-Blind Role In Halo