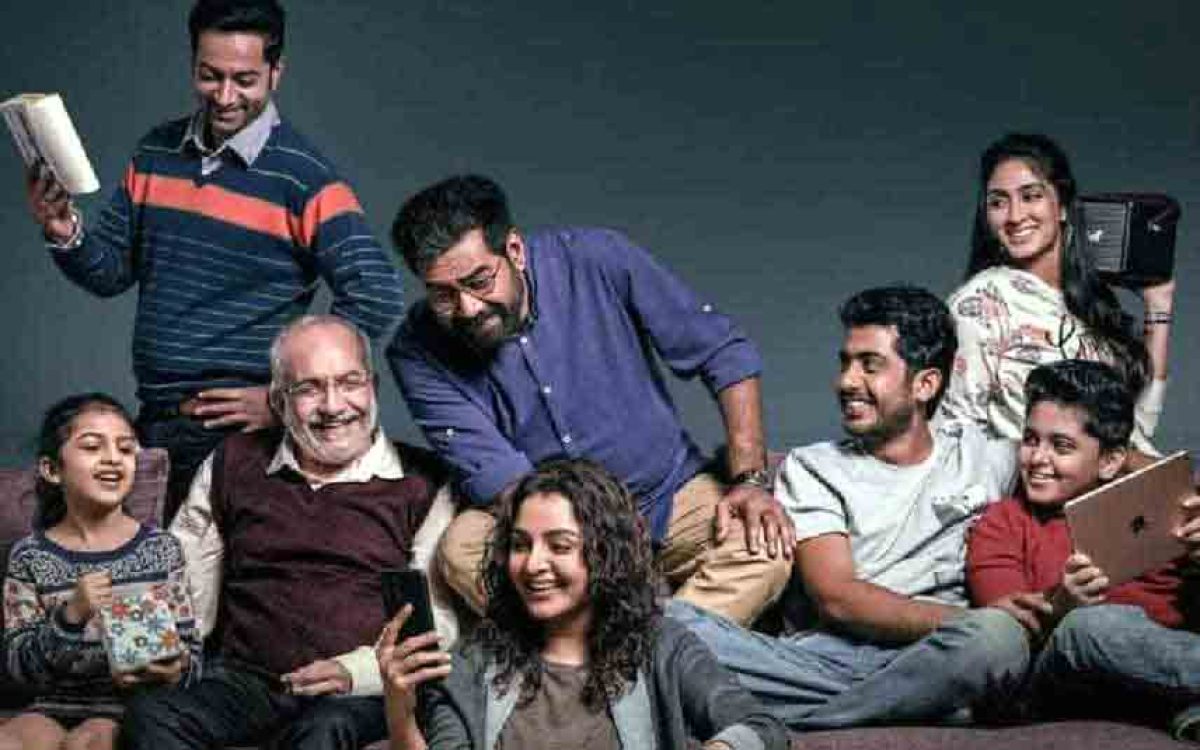 The  joints of the  joint family may have started to creak. But  cinema on  the  khushi and  gham  of joint families are  certainly not giving up on their  exacerbated quotients  of  optimism.

I am sure Sooraj Barjatya would love  Lalitha Sundaram.It is  a film which means well,and that genuineness excuses the  vast stretches of clunky storytelling that  sets  in  every time the characters run out of reasons to  fight. That having being said, Madhu Warrier’s  film still has  a lot going for itself.

The cast is vast , what with the entire Das family congregating at  their father’s ancestral  home  for Christmas .Each  of the  siblings  gets   a hurried  backstory to justify his or her disengagement with the  joys   of a  family  get-together. The only  one  who  seems perky  is  Annie Mary Das(Manju Warrier) who is  a hotshot  executive whose kind  understanding husband Sandeep(Saiju Kurup)  has taken  voluntary retirement   years  ago so Annie can pursue  her career.

Even Annie’s fragile edifice  of happiness comes  tumbling down when her husband, in one the rare intense  outbursts  denied  to   most of  the  tra-la-la characters,  berates  her  in public for presuming he  was happy as  a  house husband.

Some  amusing shock occurs when  the youngest  sibling Jerry(Anu Mohan) arrives at  the family gathering with his live-in girlfriend . The  family is divided  on his  unorthodoxy ,although  the screenplay (by Pramod Mohan) doesn’t  dive  too deep into the  family dynamics.The  jokes are all about where Jerry will sleep in the  night. Giggle.

Also Read:  Nikamma: For Those Who Have Nothing Else To Do!

This  family-shocked-by-live-in-girlfriend angle was recently  seen  in another  Malayalam  film Salute. Is it  meant to be  a wakeup call   for conservative families  or just a humorous shake  of  the family  tree ? Either way, the  live-in debate is at least being touched on in regional cinema, unlike  Hindi cinema  where the heroine is  considered a slut  if she  wants  to have sex before marriage(ref:  Tadap).

For all its disarming  grace and simplicity, Lalitha  Sundaram  moves with  utter caution  through the labyrinth of inter-family relationships.I wish it would have dropped its guards  once in while. The  confrontational  moments among the  family members are  almost apologetic in tone.

In the second-half there is  a pointed reference to singing  careers being messed up bey egoistic judges  in reality shows.  Here the narrative  dithers between  the surface treatment and a  deeper  thrust  and  finally settles for  the former.As  a surface-level sentimental journey into the heart  of  a dysfunctional family Lalitha Sundaram  is an over-sweetened  almost lachrymose product with some  dreadful   acting,  especially by the children .

The stand-out performances  are  by  Biju Menon  as  the troubled eldest sibling who seems  to fail at  everything he tries , and Sudheesh as the family friend who is  there  for everyone  although the family seems  to take  him from granted. These are relatable  characters with  issues that are genuine , though their resolution  is  hurried and  unconvincing.Nonetheless this  is a  much less shallow  and  silly film  than the family films  of Sooraj Barjatya.