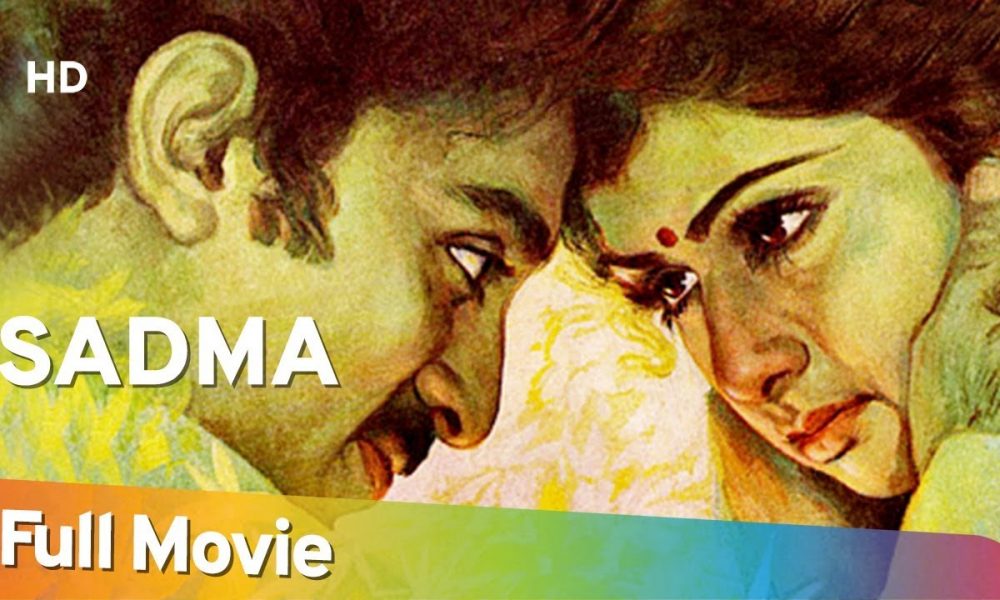 The one thing that can be said with utter certainty about this Kamal Haasan-Sridevi starrer is that nothing like Sadma has ever been attempted in Hindi cinema . It was attempted earlier in Tamil, when director Balu Mahendra had directed Moondram Pirai , the story of a 20-year old girl who regresses to a 7-year old after a road accident and lands up being looked after by a reticent school teacher.

Sridevi spent months preparing for her part. The skill with which she played a 20-going-on-7 girl remains to this a day a touchstone of her wizardry before the camera. It was Shekhar Kapoor who said during Mr India that Sridevi had any number of ready expressions for every scene. The director simply had to choose. In Sadma the choice was far less spectral. Sridevi had to play the character as childlike without overdoing it.Since it was an adult woman playing a child the risk of the role turning cute or, worse, hammy hovered over  the part.

Balu Mahendra let Sridevi control the character’s regression in ways that made the transition  look utterly convincing. But what holds the film’s delicate structure in place  is Kamal Haasan’s masterful rendition of Shomu, a man who willy-nilly finds himself drawn to the child-woman who has landed up in his life. The sexual undercurrents between the unlikely pair had to be kept completely out of  the  script’s reach. What had to shine  through was Kamal’s nurturing instincts.

The girl’s stark vulnerability is spotlighted in the sequence where Shomu lands up at a brothel with  his friends to lose his virginity.He is shoved into a room with this lost Lolita Sridevi who is even more clueless about the brothel protocol than Shomu. The supple undulating back-and-forth of words between the two unlikely compatriots in a sex joint gave to the ensuing relationship a kind of freewheeling definition that Hindi cinema seldom  tries to tackle.

Indescribable in its sublimity, the relationship that Kamal Haasan’s character builds with Sridevi is reified in anecdotal nuggets caught by Balu Mahendra in motions of sheer poetry.That he did the camerawork himself gave the film’s outer and inner world a kind of luminous homogeneity

It’s a happy coincidence for the film that the lyrics that tie Ilaiyaraja’s fabulous score are written by Gulzar. The Yesudas-rendered lullaby Surmayee ankhiyon mein ek nanha-munha sapna de ja re pervades the space between the father-lover and the child-woman with ambrosial amour.

Sadma to this day touches those recesses in the heart where our cinema is normally not allowed to go. Years after Sadma  Sridevi had once again stepped into forbidden territory when her character fell for her surrogate-father Anil Kapoor in Yash Chopra’s Lamhe. That relationship was brought dragging and kicking to a happy conclusion.

The couple in Sadma was not that lucky. The separation brought on by Sridevi’s character’s memory-revival is the film’s highest dramatic point and one of Indian cinema’s most emotionally charged sequences. As Sridevi leaves on a train Kamal Haasan’s character tries every monkey trick to revive her memory of their months together.

She looks with appalled curiosity at the stranger outside her train window performing what looks to her now like a crazy man’s antics.But these very antics were during her regression Somu’s  entertainment for the child-woman.

What will the man do now? Would he able to spend the rest of his life with the memories of those months that he spent with the child-woman?

Interestingly another Hindi film L V Prasad’s Khilona based on Gulshan Nanda’s Hindi bestseller which came 12 years before Sadma, depicted the plight of a prostitute who’s roped in to ‘cure’ a mentally unhinged man(Sanjeev Kumar). She nurtures his sensitive emotions to recuperation and is then forgotten by him once his memory returns.

Kamal Haasan says Sadma and its earlier version Moondram Pirai were actually based on the director-cinematographer Balu Mahendra’s relationship with his actress-wife Shobha(who later committed suicide). Shobha was years younger than  the director.

Sex in Sadma is represented by Silk Smitha who tries to seduce Kamal Haasan with her come-hither tricks. The contrast between Sridevi’s child-woman’s character and Silk Smitha’s voluptuary was played up to give audiences a libidinous leeway in a story that  otherwise turns the typical man-woman pair in popular art into figures separated by  more than just beds and bedded activities.

Embedded in  the reverberant philosophy of Sadma is the message that every man-woman relationship has a peculiar destiny. Cinema is in that sense uni-dimensional. A man and a woman can only be thrown together to share conventional dynamics. But what about those relationships which are only an ehsaas, not to be touched by any haath, not to  accused of any rishta beyond the one that the experience on screen puts forward?

“Does Sridevi actually say she has learnt a lot from observing me? If she says so then I must say she’s good learner. The amount she invests into the camera is exemplary. There’s a dispute between Sridevi and me about how many films we’ve done together

She says it’s around 25 films. I say it’s a lot more. Moondram Pirai and its Hindi version Sadma are surely our best-known work together. Balu Mahendra and I shared a very close relationship . His debut film as a cameraman was with me. We used to sit and talk about films between shots.He used to listen to my scripts. So we had a bonding. In spite of being my senior he’s like a friend.When Balu directed his first film Kokila I was his actor. Shobha whom  Balu loved, played the lead. It was again about a very unusual relationship.In Sadma both Balu and I made a conscious decision to keep sex out of the relationship between me and Sridevi. Not that he or I was verse to the idea of sex on screen.We had grown up watching cinema from the world over .And I’d like to think we had imbibed a certain maturity in our outlook which showed  in our work together.However my character in Sadma finds Sridevi in a place that epitomizes sex. A brothel. It was like kichad mein Kamal Haasan, ha ha. That whole contrast between her innocence and the world at large was preserved in the way I cocoon,shelter  and protect her from the outside world.My character was based on Balu Mahendra who at that time was in love with Shobha, much younger to him. I had known the girl from my childhood. So I asked him what he was doing playing his creative cards so close to his chest. But he just kept quiet. And he was so senior. I couldn’t question him beyond a point.It was an artiste’s way of  liberating himself from his anguished emotions.I heard Shobha committed suicide when I was shooting the climax of Ek Duuje Ke Liye. I just played my part instinctively.The railway-platform finale was partly my idea. Balu wanted a restrained finale where she drove off quietly.He was very minimalist in approach. When Sridevi came on location Balu gave her coconut to rub on her face. No makeup was allowed.The face was to be washed with soap only. And his unit was the smallest I’ve ever worked with. There were only 12 people on location in Ooty. When he would see the size of my crew Balu would warn me, ‘I think you’re being had. You don’t need so many people.’  I knew something far more dramatic was needed in the climax.My character had to show the desperation of a man who’s losing the love of his life. How would a man react if he feels he would have to spend the rest of his life without love? I had to act like a man gone crazy with desperation as he watches his life go away.Usually directors are cautious about actors’ suggestions. But Balu who is very fixed in his ideas loved the idea of my character going berserk on the railway platform.When I run and hit myself on the pole it was not an accident. Everything in that sequence was planned. Nothing was improvised. I had to show the man with his leg broken. It looked on screen as though I had really broken my leg. Luckily I didn’t have to break anything to look authentic in this film.  As for my erotic dance with Silk Smitha(O babua yeh mahua) I didn’t really think it belonged in the film. It was  a commercial concession  and I had to go along with it. It was not part of the original  script. We decided to put in an erotic dance, but in a way not done in any film before and without spending money.So we had just me and Silk. And she didn’t know how to dance…at all! The dance was choreographed by Prabhu Deva’s father Sundaram Master. He just incorporated whatever  she could do.Silk was  a brilliant mimic and could imbibe what she learnt.With due respects she was from a  village. But she had astounding sense of fashion. She kept reading fashion magazines.Hers was a very hard life.She had gone through a lot.She used to share her horrific experiences with us.She would insist on cooking for Balu and me, though she was a terrible cook.She couldn’t even identify the ingredients .I lost touch with her soon after Sadma.”