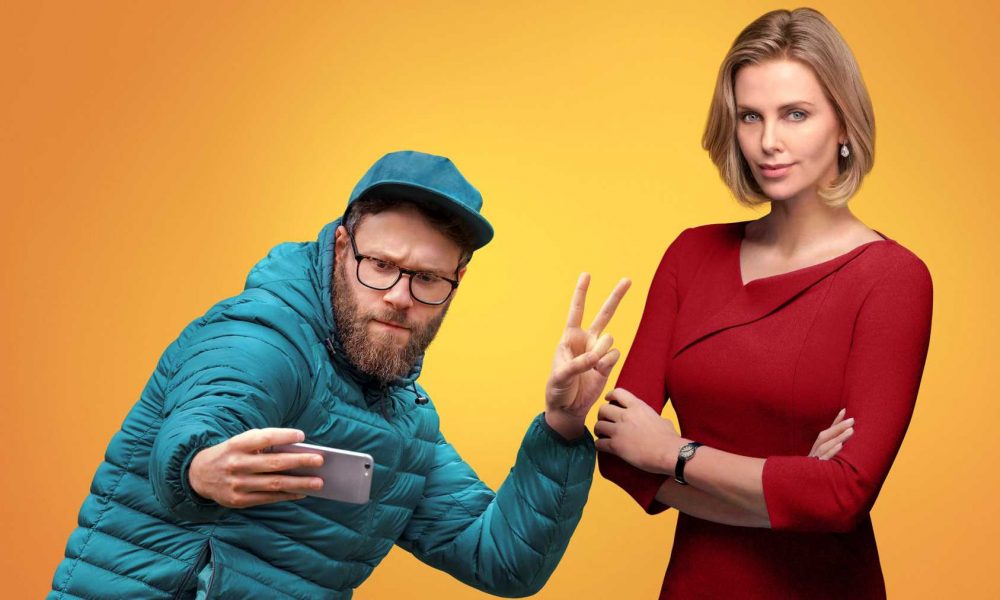 This  enjoyable but uneven rom-com, no pushover for sure, serves  up the most delectable feminist fantasy ever:  a female  American president!  How does that grab you? Especially since  she is played by the stunning Charlize Theron.

I have to  confess  all my critical faculties melt down to the floor when Ms Theron is on  the screen. Every time  she is in a  frame I simply stare at  her  eventhough others  may also have something  important to do or say.But who cares? Once  Mr Theron is  around, everything and  everyone seizes  to matter.

I really don’t know what  this film’s  architects hoped to achieve by casting Seth Rogen opposite Ms Theron.  Seth, if you   came in late, thinks of himself  as a comic genius. His entire attitude smacks of  an arrogant  self-regard. In Long Shot he plays Fred Flarsky, a specially obnoxious character, an  overbearing investigative  journalist who  probably thinks the sun rises and sets in his  posterior region.

I know this guy. He  is  the  kind who, when introduced to me, would sneer at my entertainment and cinema credentials. I hate him. And  the fact that Charlize Theron can actually love him makes it worse.

Having overcome these  existential obstacles I found myself quite enjoying the  film’s  irreverent  banter on politics and  sex, and by ‘sex’ I don’t mean just the thing  in the bedroom, but also that whole gender  equation issue,  for example the way  two tv male anchors heckle their  female colleague on a  live show, would have you in  splits, though those looking for political correctness would be pissed off.

Never mind them! Long Shot is  not a rom-com devoted to  the cause of propriety. In fact some of  the film’s sexual  suggestions are  explicit  and borderline  crass.There  is a viral  video of  Fred that Charlotte’s enemies find, where  he is seen  doing what 13-year olds do when their parents are not  home. It is disgusting to see a  grown man  behaving like a groan man, if you know what  I mean.  But it’s also fun on a subliminal level to see two mature professional levels behave  like pubescent teenagers.

At  one  point Charlotte ,the Secretary of State  and future president of America tells Fred exactly what she  wants him  to do with her  in bed. Fred’s shocked expression is ours too. The  film tells us to unwind, loosen  up and  enjoy the potshots being taken at  the  holy cows  of politics.And  it works, until the clunky writing kicks in. There  is  a whole chunk of political violence in Manila with Charlotte and Fred  dodging bullets that is  so awfully scripted  I wondered if the writers had  gone on a  flash strike. At some point after  the  couple  have  a fight,  the  script  doesn’t know what to do , so  it makes the couple stare at the  sky.

But there so much in the  storytelling that is  robust and  riveting. The performances are wickedly  enjoyable. Watch out for  Andy Serkis  as  a sleazy media tycoon m  Alaxandar Skarsgard as the  dumbed-down Canadian prime minister and  O’Shea Jackson Jr as  the journalist-hero’s best friend. They are  a  riot.

An  Indian actor Ravi Patel has quite  a substantial  role as  Ms Theron’s core staff member. He is cast in a colour-blind role as ‘Tom’. Fine. If we are looking at  a world freed  of  cultural  specificity  then  why  not  go the distance  to bridge  gender  gaps as well?Why is it so important to have a female American President?