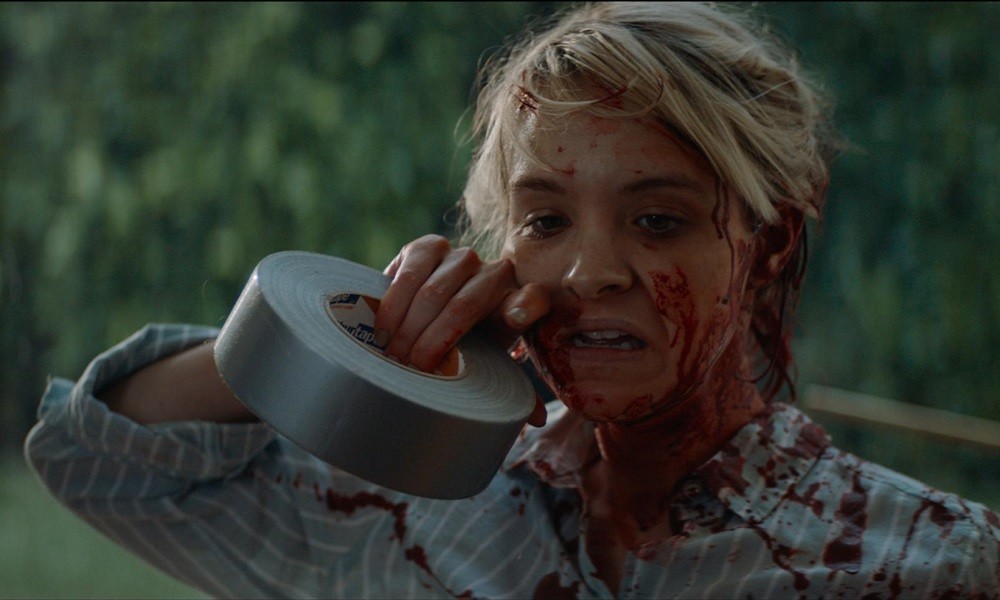 This is one helluva frustrating  angering  film.  Angering, because it seems  too closely trapped in its own  rage  to  gauge  the feelings of  the  characters who come into the  plot. And  frustrating , because  most  of  the time we are  watching the same violent incident happening  over and over  again in a  loop.

It’s like  being in a feverish dream where  we see  the same  episode  repeatedly. There is  no escaping  the  monotony of  domestic violence. We hear  you.Except that the  one perpetrating the violence on our heroine May(Bea Grant, who also  wrote the screenplay)  is not her  husband.

Before we  move on I must say I found the casting of May’s husband to be more  interesting than anything else  in  the  film.  He  is played by an Indian  actor of no great talent  Dhruv Uday Singh. But his name  is ‘Ted’ and his  Indian origins  are  not  of any relevance  to the plot, as  ‘Ted’ disappears after the  first ten minutes. May is left alone in a large house with a stalker/hunter billed in the credits as ‘The Man’  who visits  and attacks her every  night.

Every  night she  overpowers  him and  beats him down to the bloodied ground.  And still  he is back the next night, and  the next…Wait!  Could this  stalker be a figment  of May’s imagination? She  IS a writer, though  not  a fiction-horror writer. I wish  she was. Maybe then she  could have written a book on her experience with  the stalker/hunter which  I am sure, would be far more  interesting than this film which is  as monotonous as the act of violence that  it repeats   ad nauseam.

Is  the  Man a manifestation of May’s fear  of domestic  violence?   Has  ‘Ted’ been physically abusive with his  wife?(Shame on you, Dhruv) .  Is that why she  sees the  Man each night as a human embodiment of  her innermost  fears  of  being  assaulted?

Nothing except the  director’s determination  to not let her  protagonist  appear deluded, is clear  in the plot.Absurdest of all is  ‘Ted’ leaving his  wife in the house alone  when she  is being attacked every night. Could Ted actually  be the Man? Don’t look for answers in the climax which is  as  ambiguous  and dark as can be, giving  the  concept of  the ‘mask’ an all-new twist at  a time when it(the mask) has  become  an integral  part of our lives.

Lucky struck me as  a  highly stilted  awkward and  self-aware  thriller. I know it has a  deep  secret message  about  violence against women. But to get there, we have to trudge through tons  of  subterfuge and false leads. Really not worth it.

Related Topics:BollywoodLuckyLucky news
Up Next