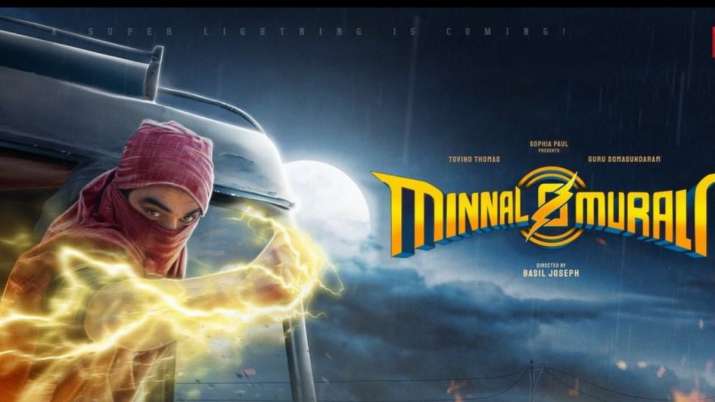 Director
Basil Joseph
Writers
Manu Manjith,Arun Anirudhan,Justin Mathew
Cast
Tovino Thomas,Guru Somasundaram,Harisree Ashokan
Plot
A tailor gains special powers after being struck by lightning, but must take down an unexpected foe if he is to become the superhero his hometown in Kerala needs.

Minnal Murali is  Malayalam cinema’s first super-hero film.  To this, we can safely add  that it  is is India’s first successful  attempt at  a super-hero film which is funny, entertaining and thoroughly  satisfying.

Considering what Indian cinema  has to offer in the genre—the memory of Remo D Souza’s  The Flying Jatt with Tiger  Shroff as a super-hero, still  makes me  shudder—Minnal  Murali is  not only welcome,  it is a film we need to celebrate  for  captivatingly  capturing the spirit  of   the superhero genre while preserving  a pungent  indigenous  flavor.

It is like dipping meatballs   into sambhar and coming up with a taste that is  familiar  fresh and inviting.Wisely  director Basil  Joseph sets the action in a small sleepy gossipy  town in Kerala. This  immediately  scales down the cultural  expanse of  the  idea, delimiting at the same time  dilating and  accenting the  plot and the  characters instead of focusing  on  the special effects.

At times  the jokes  seem  tailormade  to  accommodate  the tailor-hero’s modest tell-tale transition  into  superheroism.When Jaison(Tovino)  tries to fly to test his superhero skills, he falls flat  on his face, thereby  sparing the  film’s budget from flying costs.

“Let’s not push it,”  counsels  Jaison’s  wise nerdy nephew Josemon(Vashisht Unesh)’s , an advice well taken by the  film’s makers who know where to  draw the line between slinky  and kinky.

The presentation though  modest in vision,  is never tacky. The climax where Good Superhero combats Bad Superhero is  impressively  staged,  though  not  on the scale that  Marvel  films are shot  at.  Here the focus is  on  the way the  superhero powers affect the characters rather than on the spectacle and  special affects.

It all starts  when two unrelated character Jaison(Tovino Thomas) and  Shibu(Guru Somasundaram) are struck by  a lightning at the same  time, though  not at the same place.They both wake  up to sense of   physical strength and  emotional  turmoil that renders  their routine   life more adventurous than they had bargained for.

Rightaway let’s salute  the super-acting powers  of  the two humble super-heroes who helm this engaging fable  of  the  caped scaled-down crusaders. Tovino  Thomas is  the  rising star  of Malayalam cinema. See him as  the confused reluctant endearing  super-hero, and you’ll  know  why. However  it is Guru Somasundaram whose  emotional responses  to his character’s newly-acquired powers that anchor  the plot, and  irrigate  its irrational hurl into an odd and uncharted  orbit.

Somasundaram’s look of  gratitude and vindication when the woman he has loved all his life accepts his love, is a textbook illustration  of emotive empowerment.

More than a  stylish  Marvel of  nature(pun intended)  Minnal Murali is an intimate  character-study of power and  its  utilization  in a world progressively  driven by greed. The  film has some terrific action  sequences, more fun than fearful, where  the  characters play out a kind of  perky precocious pantomime  of super-heroism.

In  one feisty  sequence  Tovino’s  superhero takes on a  vindictive cop(well played by Baiju) with  riffs from  Queen’s  ‘Another  One  Bites The Dust’ playing  in the  background.

It’s a joyride  from the first to the last, powered  by a sense  of   logistic fantasy—if that makes any sense—whereby the  obvious absurdities  of  a flying crusader are  melted down to a ground-level   intrepidity born more of necessity than  vanity.Yes, this  homespun superhero film does overstay its welcome. But   you know  how  we Indians are. We never when to stop.And that’s the way(aha aha) we  like it.