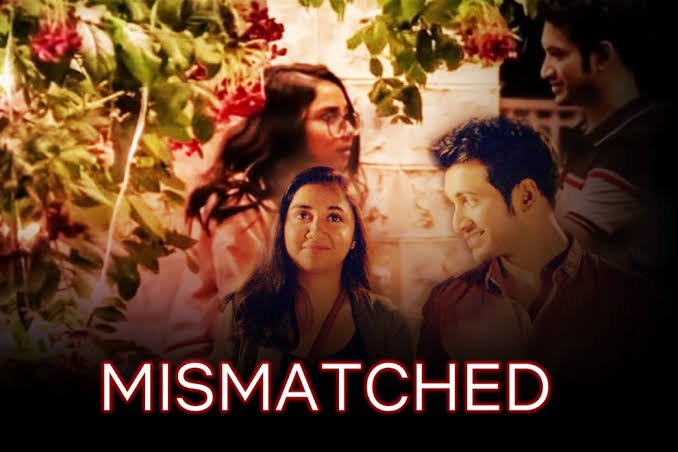 What  if  Simran in Kuch  Kuch Hota Hai were a lesbian? And what if she  hung around  Rahul  as  his best friend without ever lusting for him? Mismatched seems  to take off from  there, and we have  Namrata(Devyani Shorey), bestie to Rishi(Rohit Saraf, who  seems to have walked straight out of Ludo into   this project wearing the same  clothes and expressions).

Namrata has  the hots for the campus  gypsy Celina who  smokes joints, rides a scooty and uses  foul language. Clearly she is  a  fan  of Kangana Ranaut though  it isn’t mentioned anywhere .It’s  also  not clear which way the dyke rolls for her. Like most  of  the  situations created  in  the  over-reaching plot, this ode to lesbianism is more froth and fizz that  substance.

So much remains  unsaid  in this   mishmash of  Kuch Kuch Hota  Hai,and  Kal Ho Na Ha .The initial energy  of  the  presentation and  the  enthusiastic  performances  of  the young and the older(the two actors playing the  protagonist Dimple’s parents  are a hoot) make  us believe that this 6-episode campus caper would hit the ground running.

Sadly it stumbles and  falls  in no time at all. There is nothing wrong with a coming-of-age rom-com  populated with  all sorts dudes and babes including an over-sexed NRI chap Harsh(VihaanSamrat), a wheel-chaired angry  video gamer Anmol (Taruk Raina, potential here) , a resident nerd Momo(Rituraj Shinde), a girl who lives  only on Instagram.

The plot’s  prime  focus is  on Rishi  who  comes to the campus to win  over his  “arranged” wife Dimple.Rohit Saraj and Parjakta  Kohli  inject a felicitous wholesomeness to their parts. Some  of  the  other  young actors also  keep their characters’  spirits alive even when the  plot begins to sag in no time at all until there comes  a point where  we have no choice but to wait for everyone to quiet down and just exhale.

In fact  the  story had its say  in  the  first few episodes . Thereafter we are taken on  a sightseeing tour of  Jaipur where the  story  is set. The students are  told to work on new Apps by a  very cool teacher (Rannvijay Singh) who behaves like  a sergeant  at  a war camp where  weed is  prevalent, wears  his heart  on sleeveless  shirts  and behaves like the  most  chilled -out educationist  on this  side of Aamir Khan in Taare Zameen  Par.

All this would have been bearable were it not for the character named  Zeenat(played  by  Vidya  Malvade) who is a later bloomer and  bit slow on the uptake.Zeenat is  ridiculed  by  everyone, exploited and  ill-used  she  is  the resident  joke  on  the campus because she is  …well, not cool enough. Neither is  this  series, if you must know.So who is having the last laugh?