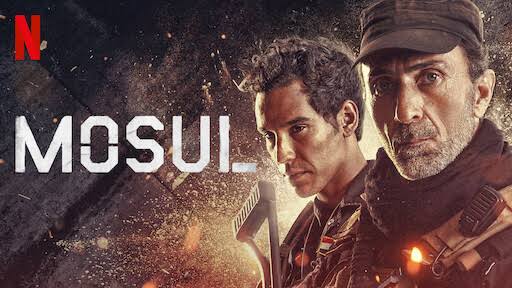 Lensing some  violent encounters  on the  ruined streets of Iraq, Mosul pertains  to be one of those  war and warrior’s tales where the sense  of  futility that war should engender  is  effectually  submerged in oodles  of  misplaced  bravado. Worse  yet Mosul seems to suggest that strife is necessary when  a society  and a  culture are  under siege.

Mosul  gives itself no leeway for  political  distancing from the characters. Unlike the 2019 war  masterpiece 1914 where  we were  thrown into a  sense  of  growing despair and dread  over the casualties  if war, there is  no sense  of  tragic loss in  the events that  unfold so stoically  in Mosul.

Everyone is  out to get a piece  of the action. The city of Mosul comes alive  in a rather predictable  way with  buildings  ravaged by bombing  and soldiers who haven’t  seen  a bed or a bath  for weeks. The main  problem  with the plot is  that  it is scattered all over the place, giving us  deliberately a fragmented view  into a fractured  civilization grappling with  civil  dissension.

The  actors are  primarily  Iraqi  or Middle Eastern. They add a  sense of  realism  to the  proceedings  though the appeal  for  hoary heroics is  limited  in  times when war seems  like such a  vulgar and violent  waste of time energy resources  man-power and  life. I would say the same  is  true of  films that glorify war while pretending to condemn them. I am afraid Mosul  is one of those  films.

Not for  a minute  did  I feel  the  futility  of war . What  was disturbingly evident were the  gun battles  which are staged like muscular displays  of  man -power. I  should have felt sickened  to the stomach  by waste and plunder, and I should be  moved at the end when one of the heroes is reunited  with his family in a room backlit in a Biblical haze of  orange and yellow.

I felt nothing. I doubt the characters felt anything. Some solid performances  by  Suhail Dabbach as  the leader of the SWAT team and  Adam Bessa as  his newest  recruit do not take away from the feeling that what we are watching is an extension of the  gamely war sentiments  of the Russo Brothers Extraction. They are  producers on this one. God save us all.