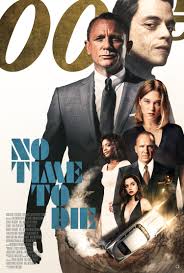 The trailer  of the  new James Bond  film is    exhilarating  and indicative of a time in the  near future when we   can all go back to the nurturing darkness  of movie theatres to experience the  exhilaration  of  a  true-blue  action-driven   eternal  franchise with  the  imperishable James Bond in his,ha ha, last  appearance in Daniel Craig’s  persona.

Sure, we believe  you.  Just like we  believe the characters  in this  magnificent  maelstrom  of  choreographed mayhem  are  in it  to save humanity  from extinction.

Humanity, in  case  anyone hasn’t noticed, is already on  the  verge   of  annihilation.  No Time  To  Die  reminds  us  of how much sheer vivacity awaits us on the large  screen, and without  the coerced   complexities  of  Christopher  Nolan’s  Tenet.

This  is  the world according to  James  Bond: violent and ruthless but nothing that a dry  martini and  a  gin can’t fix, provided they are  in the right hand. And the hand  can’t get any  more right than this.Daniel Craig kills  it from the first heart-in-the-mouth   shot of  the trailer that  was streamed  from  September  3. He  is  sharp and  atheletic, lethal and  laconic all at the same  time.

This time  Bond’s adversary  is  a guy with a chequered face, with a history of violence to match,   named Safin,  played by  Rami Malek a  fast-rising Egyptian  actor  I am not very  fond of.His Freddy Mercury  was mercurial  but self-limiting.  Here he  is pure menace as he throws glib  lines at Bond,   like  “We  both  eradicate  evil to  make the world  a  better  place. I just want  it to be  tidier.”

Tidiness even in  moments  of messy  callisthenics is  a hallmark  of the  James  Bond series.  And this  one is  elegance personified. The  chase sequences are  classier than in  Spectre in  2012.  There   is an unhurried  urgency about  the  storytelling that  is  highly tempting and  rousing. Craig’s  James  Bond is still as agile as  he used to be when  he  played Bond in 2006 in Casino Royale  for  the  first time.

Luckily  for  us, James  Bond hasn’t changed at  all.  Although the  bevy of beauties  of every size  shape  and colour(yes black too) flirting  in front  of us   has  changed  over  the years. This is  vintage Bond that leaves us more  stirred than shaken.  And  determined. This  frigging  Corona  has to go   before  November.