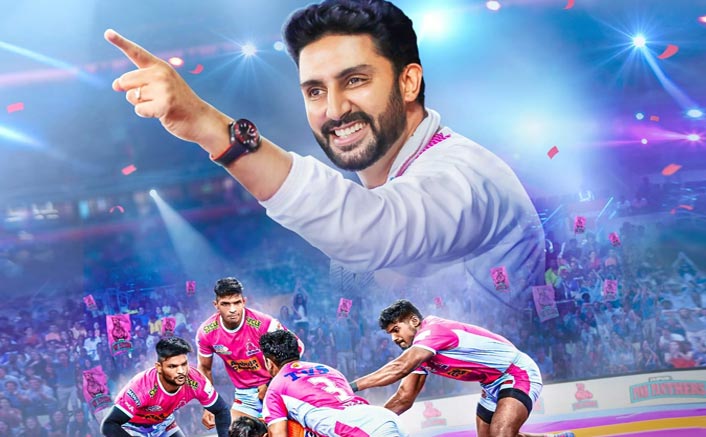 I had the privilege  of  once watching  a  game   of kabbaddi by Abhishek Bachchan’s team. He was  in Patna  and he  personally invited my  family and friends.  I went only because  I didn’t want  Abhishek to  feel bad. The game  was  a revelation. The Bachchan  boys  played kabbaddi  with an infectious enthusiasm. By the  end  of  the game  we were out of  our seats cheering.

Thanks to Abhishek the  game of  khabaddi has gone  from  the akaadha  to  the stadium.  It would be no exaggeration and  no  trivialization either, to say Abhishek glammed-up the game, gave it the much needed elitist boost , elevated its status from the grassroots to the  upper echelons.And  all this without  undercutting the game’s  inherent  rawness .

This  5-part  docu-series takes us in a journey with the  Pink Panthers   across  India as they  travel and  play in tournaments  , not always  triumphantly,But heck, watching the  boys in their  spirited avatar is   to be reminded that cricket is  not the be-all-end-all to the  sporting spirit in India.

We  see  the Pink Panthers practising on  the  field. We  also see  them in their locker-room chats and  best  of all at home being pampered  by  their entire family. One  players takes us on a flash tour of his new home as he proudly shows his  shiny washingmachine , refrigerator and mixie. Another player’s  mother does  an oil massage of his head  asking about where Abhishek takes care  of  him.

Also Read:  The Bhupinder Songs That You Don’t Know, But Should

“Maybe he will arrange  your marriage,” Mataji  giggles  .The  conversations about kabbaddi  are  nicely balanced with   the players’ home life. Abhishek  Bachchan  who serves   as  a narrator  could have been a little  more relaxed to go with the informal of the game. Also he could have shared  more anecdotes  on  his team players,  their dreams, desires, fears,  love life.

All we see  is the players  as kabbaddi  enthusiasts. In that  capacity they  come off with  flying colours  in  this  sharply-cut documentary which travels from Hyderabad to Ahmedabad to Patna  in search of an answer to the  question of an eternal  quest. What  makes a  man(or a woman) so  keenly devoted  to  a  game that outwardly  looks  like  a bunch of boys bullying each other down to the  ground?

Related Topics:Sons of the Soil: Jaipur Pink Panthers
Up Next