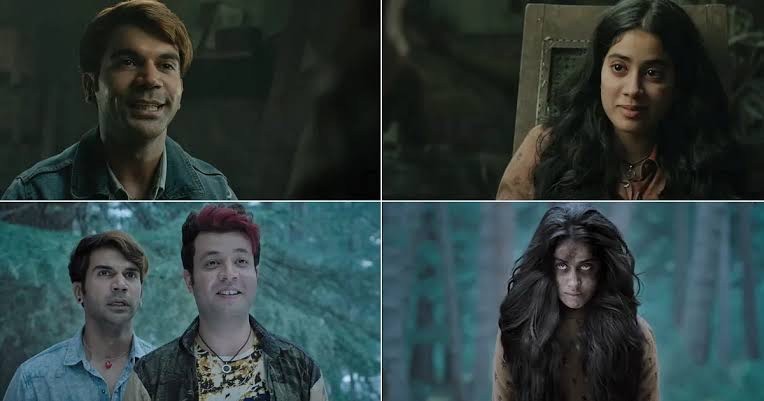 1.     It is the  first  big-budget film of the  year, and  not  a  carryover from another time being revived  to cash in on the current  famine of  movies  for release. Roohi is a full-blown  big-screen  experience.

2.     The  last film in theatres  before  the lockdown was Angrezi Medium from the same  producers Dinesh Vijan of Maddock films. Sources  close to Vijan say, “There was  never  any question  of  releasing Roohi  on any platform except  the  big screen.”

3.     Janhvi  who plays a  chudail closely studied  the behaviour  of  several women in Hollywood films possessed  by the devil  . She was particularly taken up with Linda Blair’s  demoniacal performance in the horror classic The Exorcist.

4.      Those who  have seen the  film are falling off their  chair laughing as the two  guys in the film Rajkummar Rao and Varun Sharma fall in love  with Janhvi and the chudail inside her, respectively.

5.     Janhvi’s  last release Gunjan Saxena  was  a big hit on the OTT platform. Roohi is  her  third release and  audiences  see her as a young actor  who chooses not just commercially viable films with a superstar-costar  where she has nothing to do(Sarah Ali Khan,please note) but films that are potential hits  and have a substantial role for her.

6.     Finally a   film in  movie theatres  that  the audience finds  interesting. Roshan Singh,a prominent movie  exhibitor from Bihar says, “All the  films during  the last one year that interested the  audience went to the OTT. Roohi is  the  first  film in the theatres that interests the audience.”

7.     Rajkummar Rao has already scored  Stree in  the horror-comedy genre.  He feels Roohihas  the potential to be as  big as Stree.