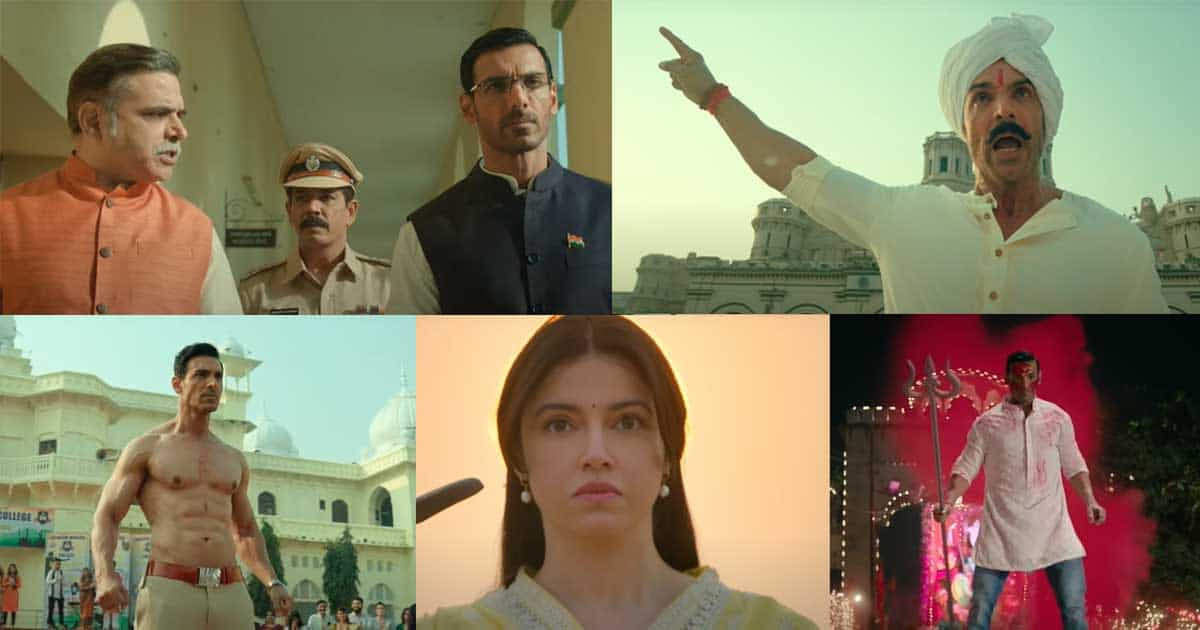 Satyameva Jayate 2 has become the latest victim of film piracy. The John Abraham starrer has been leaked online on Tamilrockers and other sites.

It is believed that even if the piracy platforms are banned, they again appear with a different domain. We urge users to refrain from any kind of piracy.

Director
Milap Zaveri
Writers
Jass Manak,Manoj Muntashir,Nasir Kazmi
Cast
John Abraham,Divya Khosla Kumar,Manoj Bajpayee
Plot
Satyameva Jayate 2 revolves around the fight against injustice and misuse of power. From police and politicians to industrialists and a common man, the film will explore corruption in all spheres.

Satyameva Jayate 2: How does  he do it? Which energy-boosting drink does Milap Zaveri  consume to  whip up such a high-level  energy in every  shot?

Satyameva Jayate 2 is  like   a ceaseless string  of high-pitched climactic sequences  that roll out one after another. Just keeping up with Milap Zaveri’s energy level is exhausting for the audience. But he  won’t let us off the hook. His anti-corruption  tirade  is  loud and crude   . But   it’s also the harsh reality of modern India where every day a new scum and a scam is  unearthed. Every week  one more  newly constructed bridge falls, and every day a child gets raped(these statistics are dubious, just like the Indian politics and bureaucracy).

Meet  Zaveri’s twin  heroes Jay and Satya, in Satyameva Jayate 2, both played by John Abraham and hence hard  to tell apart  besides one  wearing  spectacles and other showing his  muscles. Jay is a  cop who reaches on time  every time  a criminal act is  about to occur. In his  introductory  sequence when  the molester  challenges him to  present himself  without his khaki uniform,Jay happily whips  off his shirt and  does  a muscled ramp walk right there on the streets.

The advantage of having John Abraham  as your leading man in Satyameva Jayate 2 is that  the  hero can strip anywhere anytime without looking  awkward. Jay’s twin brother  Satya is  a fully buttoned-up  solemn stone-faced politician whose anti-corruption bill  gets booed down in parliament.

But never mind .He can go out on the streets and kill every potential socio-political offender without batting an eyelid. And that includes highly  corrupt  fellow-politicians who feed  contaminated food to  little  children in madrasas…

Dangerous territory, you say? Fiqar not!  Milap Zaveri loves every community  , every religion…every  sector of Indian society get a  voice in the narrative. When  an evil bureaucrat flings the Holy Quran  in the air, our hero catches  it. When   a woman is  fatally injured a  Sikh Man(played  by the  ever-dependable Shaad Randhawa) undoes his turban and uses it as  a bandage…I am sure there is a Christian and Parsi  act of  good samaritanism somewhere in this “16,000 feet  long  celluloid flag”(a picturesque  description of  Manoj Kumar’s  paean to patriotism  Upkar) which I  must have missed. Or maybe Milap has saved  them up  for Part 3 and 4.

Satyameva Jayate 2 is  a  bigger bloodier  bulldozer of  an anti-corruption film than Part 1. Striking doctors are struck dead, conniving cops  come to a sticky end, and ruthless businessmen  are burnt to death. In the second-half when we are  introduced to  a third John Abraham(yes  there’re  3 of them) Zaveri feels the  going to be  too heavyhanded.So he introduces some comedy into the  relentless acts of vigilantism.

How? You may ask. Please don’t. There are things that Milap Zaveri can do that  no filmmaker  can dream  of. Not even Zaveri’s  role-models Manmohan  Desai and Rakesh Roshan.The ‘comedy vigilanteism’ features a sleazy cop being beaten black and blue by our hero while the cop laughs his head off,.“As if part  2 of a hit  franchise is going on, ”someone comments. You get the reference?

My second-favourite performance in this violent  ode  to  vigilantism is  by the  cop in the comedy scene played by Arpit Mishra. But my most favourite performer  this time is  a  young Marathi actress named  Bhagyashree Limaye  who rips the screen  apart as  a gangrape  victim screaming and burning  for justice.I think she  gets the  high-pitched  sur  of  Milap Zaveri’s  melodrama better than  anyone else.

And  there  is  Divya Khosla  Kumar playing the  politician-vigilante hero’s   wife. In  a product  bursting with  clamorous  flag-wavers, she is  comfortingly serene.

Everyone  gets  to  sprout Milap Zaveri’s  rhyming couplets  that  serve as  dialogues. It is all about tann-mann-dhann…jana gana mann… A message  with a whole lot of fun.

In a society where  bureaucrats behave like Bollywood superstars and politicians act as though they are  gods, we need  Satyameva Jayate 2 to make some noise.

How Can I Become an Actor- Perfect Guide for Freshers in 2022!