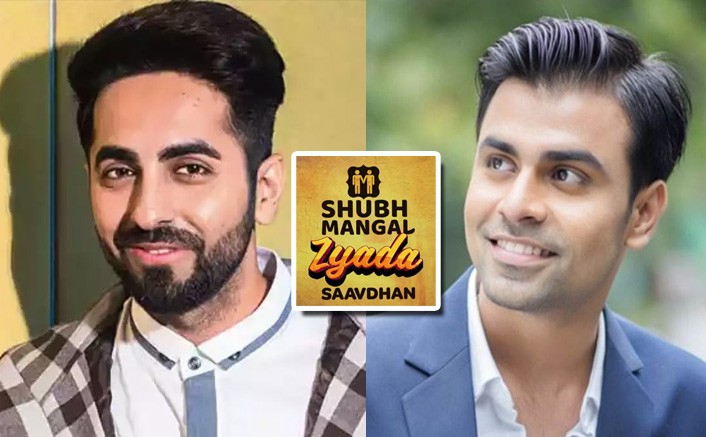 So far  gay  rights  and feelings have been blissfully subverted in Hindi cinema. In Karan  Johar’s Dostana, for example, John Abraham and  Abhishek Bachchan were only PRETENDING to be gay.

So all was well in the (hetero) world.

There is no  pretense, no artifice, no  beating around the bush in  Shubh Mangal Zyada Saavdhan (SMZS). Straight(?)away we are introduced  to   the couple  in  love. That they both happen to be males makes no  difference to the script.  Like Luca Guadgnino’s Call Me By Your Name where  Armie Hammer romanced  Timothee Chalamet  amidst  the  languorous sunkissed  splendour  of  the Italian countryside, Ayushmann Khurrana and  impressive debutant  Jitendra  Kumar are  a couple in  love, facing  all  the  normal problems  of  a couple in  love such as parental  opposition and the right  to  privacy.

But here is  the thing.  Unlike  Call Me By Your Name,  the narrative in  SMZS  doesn’t float in a hazel haze. The setting is not a postcard idyll  but a mofussil chaotic town with  messy mores to match. And the two  protagonists are not matinee-idol posterboys  but  highly relatable  people whom you may  bump into while strolling down Varanasi’s  Ganga ghat.

“We wanted  to make the  characters  as  relatable as  possible.At the same time we didn’t want to make  it a serious humourless  study  of a socially relevant  subject. I believe one  can keep the tone light and  yet be a responsible filmmaker,”  says producer Aanand Rai .

Shubh Mangal Zyada Saavdhan will make you think and  discuss sexual preferences . It  will also open up  doors for  mainstream  filmmakers and  actors  to explore new themes .

Onir the only  openly gay filmmaker  in Bollywood who made My Brother Nikhil ,the  only  other authentic   film on a gay relationship many years ago ,  says, “I’ve a feeling Shubh Mangal Phir Savdhaan is  not  just another sanitized  gay love story and that we’ll get to see a real romance between  the guys. Looking forward to it.”

Onir says it is time to go beyond the physical aspect of a gay relationship and look at  the  real emotions underlining such a relationship. “I want to see love  portrayed as  love in  a gay relationship.And I don’t mean just a kiss. I mean  the look in the eyes, the  sensuality and  desire. The  queer gaze is different  from the  male gaze or the female gaze. Now it’s time for the queer gaze to come  into cinema, and not from within the  closet.”

While  SMZS is not a queer film made from queer gaze(the director and actors are not  homosexual) it nonetheless captures the essence  of  the  same-sex relationship with a natural warmth of tone  that a gay filmmaker like Onir will approve of.