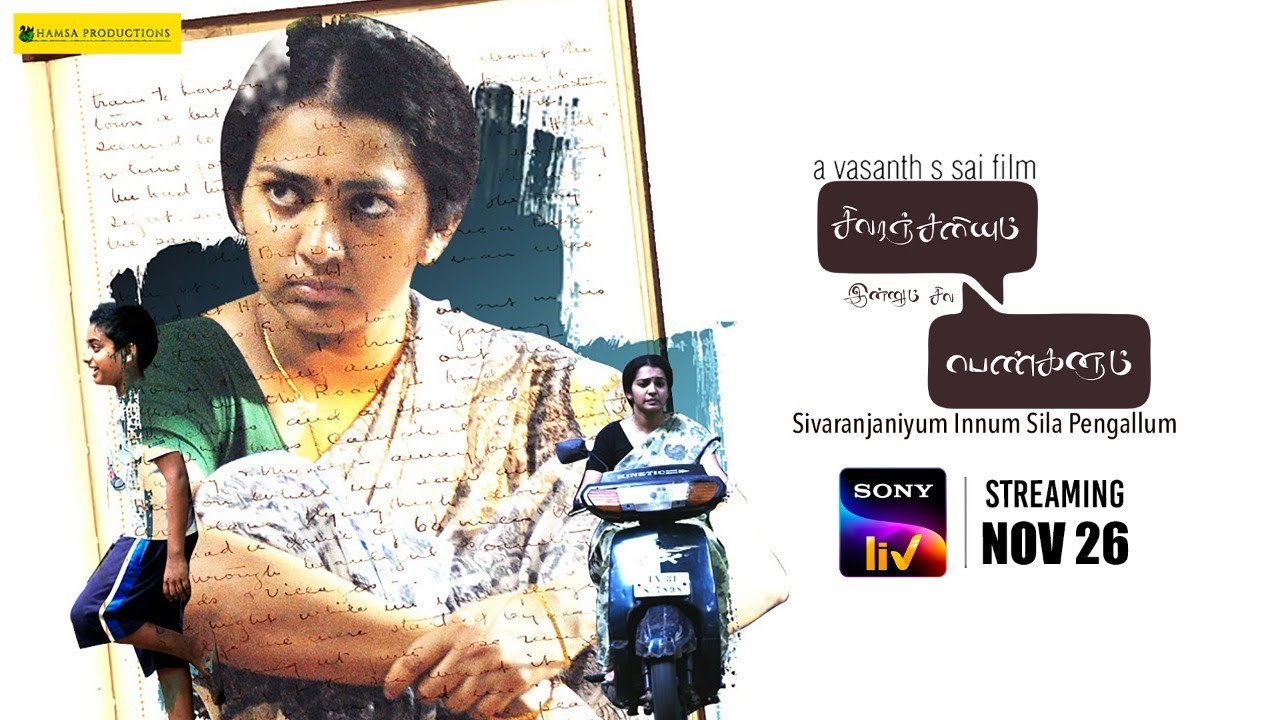 This is just not done! How can an anthology about women who are so ordinary  be so extraordinary ?! Sivaranjiniyum Innum Sila Pengalum is an experience that words cannot really describe. Words, in fact are  redundant in  writer-director’s  Vasanth’s vision of what it  is like to be a housewife in an average Indian marriage. The three women protagonists seldom speak. The men  do all the talking.

In  the first  of the  three  sharply evocative, deeply ruminative stories we see a very ordinary woman evidently from  an underprivileged  section, walking behind a self-empowered man who  strides imperiously ahead of her. She carries a  baby  in one hand, and  a  jhola in the other. As they reach a bus, the man climbs, uncaring about whether the wife has also boarded. The woman, who we later come to know—much later—is named Saraswati(played with an exceptional  self-obliteration by  Kalieswari Srinivasan who was  outstanding in  Jacques Audiard’s Palm d’Or  winning  French film Dheepan ).

Saraswati is one of  millions of housewives  in the country : are faceless, voiceless, choiceless.

Saraswati’s  story is so  commonplace that we would not even talk about it. That a film captures her catatonic miserable  life, is  a miracle.  This film is  a marvel of nature, unique in its commonness, exceptional in its unsentimental  perspective  of  housewives who make sacrifices with every breath they take.

The handheld camera(N. K. Ekambaram) quivers precariously at times. It is the most emotional component you will encounter  in this remarkably  dry-eyed tragedy. Each  of the three woman are felled  by the  musk of masculinity that shrouds them in  marriage.

In my  other favourite story  Sivaranjini(Lakshmi Priyaa Chandramouli) a former athlete  has throttled her dreams of an  athletic career to fit into her husband’s cosy  cloistered  household. The numbing monotony of Sivaranjini’s frantic daily routine is captured with the same disturbing  comprehensiveness as  that wonderful Malayalam  film The Great Indian Kitchen.

As opposed to the brutally  insensitive husband in the first  story set in  1983 , the  husband in the  third story set  in 2007 is  rational, kind ….normal. This is what  makes the anthology so persuasive , relevant and evocative: the men are not specially insensitive to the  needs of  their wives. They are  more products  of  their  times than oddities. More rules than the exception.

Also Read:  Ponniyin Selvan Is A Pain In The  You-Know-What

In the second story  which is my least favourite of the three episodes(and not because it is  any less powerful but simply because  the  other two stories are more  powerful) we meet  Devaki(Parvathy Thiruvothu) .This is  1990 , and things have changed for middleclass women at least on  the surface. Devaki is a working woman. But hang on . She is constantly answerable to not only her  husband but also to his  family. When Devaki is “caught” keeping a diary  all the hell breaks loose. Devaki must explain her behaviour.

The  entire story unfolds  through the eyes of Devaki’s little nephew who becomes the non-judgmental  male gaze  in  a patriarchal household.Remarkably  the entire segment is  shot in longshots—we barely get  a glimpse  of  Devaki’s face– expressing a  deep soulful distance between the world created on screen and  the world inhabited  by the  child.

All three stories have  sterling  lead  performances by  actresses who merge  into the crushing milieu with heartbreaking  authenticity. Each of the protagonists  gets her liberating  moment at the  end of each story. But there is no  triumph in their belated  victory. This is not the world of Mahesh Bhatt’s Arth and these women are no Shabana Azmi. They are women we never notice. Never acknowledge  their inert  lives.  About time someone shook up the status quo.  Sivaranjiniyum Innum Sila Pengalum does it with a  gentle yet savage grace.  Never overstating the  women’s  right to  protest. But not undermining it either.