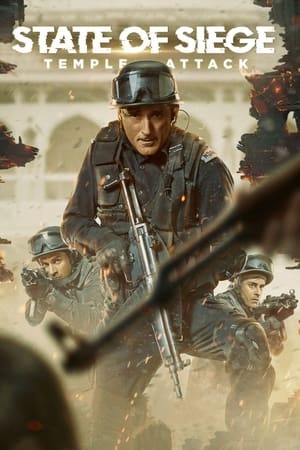 Director
Ken Ghosh
Writers
William Borthwick, Simon Fantauzzo, Farhan Salaruddin
Cast
Akshaye Khanna, Gautam Rode, Vivek Dahiya
Plot
Based on the true incident of the 2002 terrorist attack in Gujarat’s Akshardham temple, the story revolves around the bravery of NSG commandos, who stood up for their country and their people in the worst of times.

State Of Siege Temple Attack Review: To reduce  the  looming  global issue of terrorism to  pulp fiction , with the tadka of  fireworks  and  other friction,  is akin to making a  video game out  of   the Covid  pandemic…archvillain named  Covid, etc…you get the picture?

Directed  by Ken Ghosh,  this feature film very roughly and crudely inspired by the terror attack  on Akshardham in Gujarat  in 2002 , plays  it strictly  by  the  terrorism formula of  filmland.  The two sides in the messy war  are neatly  aligned  .Once the shoot-out starts  there  is no room  for any kind of subtlety, as  the  guns  boom with  the  artificially induced  kinetic energy   of  a typical Hollywood  survival story….Without the slickness  or the intelligent  writing.

In fact the writing in this  engaging pulp actioner  gets  so  clunky at times that I  found myself cringing in disbelief.  Let me give you an example. Towards  the end when the siege has almost ended  our hero  NSG  hero Major Hanut Singh(Akshaye Khanna)  mumbles,  ‘Koi khabri hai’. Meaning, someone  from  inside the temple  premise is  informing the terrorists  of  he  NSG’s  movements.

The  next  minute  Major Hanut is  outside a  bolted door in the temple, hearing someone whispering  into  the phone. Clearly it’s not just the bunch  of brainwashed  terrorists with  bloodshot eyes who have taken over  the temple, who are  running out time. The writers  of this  heavy handed terror  tale  too are  in  a  tearing hurry to wrap up  the  siege so everyone  can go home.

Barely any character gets  the chance  to breathe  in the script.  Akshaye Khanna is as usual impressive in his uniformed  role. But even he has little  space  on   the  screen , since much of the playing time  goes into showing the terrorists  gunning down  the  temple worshippers  and gunning  for   the  temple-ates  with  various potential victims  hiding ,cowering , bonding with one  another in the hour  of  diabolic distress.

There is a  Caucasian tourist Angela(Kallirroi Tziafeta) who calls the  terrorists “animals” in  their face.  Predictably  the “animals” are not  impressed  by her  outburst. There is a callow tourist guide named Chintu whose father keeps begging on the phone  with the terrorists  for his  son’s life. Not one  character is given a  chance to  flesh itself  out.

While Akshaye  remains  a fringe player his colleagues played by able actors like Akshay Oberoi(who  makes a fleeting appearance  in the  prologue) and Gautam Rode get even  less to do. Abimanyu Singh as  the  terror kingpin is  a hoot. And  poor  Manjari Fadnnis. She is lost in the crowd  of sharpshooters. Didn’t she  know? Terror movies  are not  a good place for female  actors to be. You either get killed, raped or ignored. Samir Soni as Gujarat’s CM  looks like he is afraid to let his  designer kurta-pyjama get soiled  by bloodstains.

The  terrorists with  names like Farooq , Hanif and Omar speak in Punjabi and are  given the luxury  of  using cusswords liberally(sort of like  a supplement to the biryani in jail). The commandos keep their language  and operations clean. They are  the  heroes we are supposed to  cheer  for. To be fair, the  film is  not unwatchable. Anything beyond that, it doesn’t aspire to be.