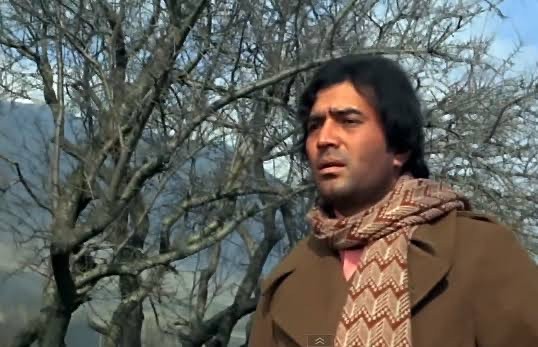 Love is  not  only about  togetherness and  joy. It is also about being torn apart and the abject grief  of  losing love. Which are  your  favourite songs of Birha? Here are mine

1.     Milne se pehle bichad jayen hum kyon banke bigadd jaye bhaag  by Lata Mangeshkar(Aag Hi Aag): This  song  in 3 parts about parting  being such a  crummy condition,  has a history. It was to be  sung by Kishore Kumar. Reveals  Aag Hi Aag producer, PahlajNihalani, “It  was  composed  for Kishore Kumar. But when he  came to the recording studio and  heard the tune he  shook his head and said, ‘Nah, yeh gaana sirf Lata gaa saktihai, Ussko bulao.’ We  persuaded him  again. He came to  sing the number again. Again , Kishoreda said , no get Lata. Then Bappida and  I  began thinking. If Kishoreda thinks it is for Lataji,  it must be  for her.’ She came, she sang all three parts of this birha  song  in no time  at all. It was perfect, flawless. When  she sings the words  ‘Mitwa  oh mitwa’ in  the Bengali baul tradition we all wept in the studio. According to me  this is the finest song  on separation  in love in Hindi cinema.”  Adds Bappi Lahiri, “When I  hear this song I  know why I call her Mata Saraswati. She is beyong incredible. I don’t know how Kishore Mama would have sung Milne se pehle in Aag Hi Aag. But after hearing how Mata Saraswatisang it we were sure there was nothing more  that could be done  with these heartbreaking lyrics by Anjaan.”

2.     Zindagi ke safar mein  guzar jaate hain jo muqaam woh phir nahi aate  by Kishore Kumar(Aap Ki Kasam): Rajesh  Khanna brought  out the   best  in R D Burman. Their  collaboration has given us  some of the most indestructible melodies  of Hindi cinema. Even  by their formidable track  record  this song written  by Anand Bakshi about looking back at those cracks through which  love fell through, is an epic creation. It is a melody about love, loss  and regret  that has embedded  itself deep in our hearts.  Kishoreda sings the lines as  though they belonged to him. He may have been generous enough to pass on  Milne se pehle to Lata because  he felt only she  could do full justice  to it.  But as diehard Lata bhakt I can still say , no one but Kishore ould  have sung this  monumental ode to lost love.

3.     Tum bin jeevan  kaise beeta pucho mere dil se by Mukesh(Anita):  There  was  something in Mukesh’s voice, something deeply pained and wise, that made him the ideal choice for songs  about fugitive  love and  heartbreak. This  number composed by Laxmikant-Pyarelal is so beautifully written and sung and it captures the ethos of estrangement so enchantingly  it  brings tears to the eyes each time. Saawan ke din aayebeeti yaadein layen…The rain cannot hide the pain.

4.      Pucho na  kaise maine rayan  beetayi by  Manna Dey(Meri Soorat Teri Aankhen):  There is nothing that can be said  about this song which can do justice to its limitless evocativeness.I once asked the late  great Manna Dey  about the unplumbed depths of pain that he ferreted out of lyricist Shailendra’s wounded words.  Mannada had laughingly said, “That pain you hear in Poocho na kaise could be the pain I felt  for being typecast in classical songs. No, but seriously it was a raga-based  number and Burman Dada(composer Sachin Dev Burman) had to call me to sing it.”  I feel some  of  the  impact of the song  is blunted on screen by Ashok Kumar whose face was blackened by bootpolish . There is  another (unknown)  actor  listening in rapt attention to  Ashok Kumar  lip-snycing  the  pain-lashed tune. He  completely  gets it.

5.     Piya bina piya bina  by Lata Mangeshkar (Abhimaan):  Piya aise rothe  ke hothon semeri sangeet rootha  kabhi jab main gaoon lage mere mann ka har geet jhootha. Wah, Majrooh Sultanpuri Saab. A broken heart never  sounded  more evocative, thanks to Lataji’s  boundless aptitude to express longing and pain. When I met the  film’s director  Hrishikesh Mukherjee he showed me the place in his home where the song was composed. Lataji recalls, “Burman Dada sang the song to me. I don’t think I captured  the  longing and pain in the lyrics  the way he did.”