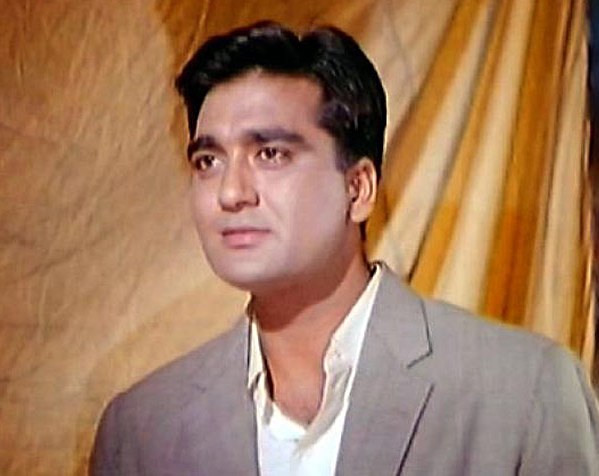 Among all  the  screen heroes , Sunil Dutt was the  only true feminist. While several leadingmen   pretend to  believe  in  gender equality their actions prove otherwise . Not Sunil Dutt. In real life  he  rescued  Nargis from a fire on sets of Mother India  and from  a deadend relationship with  Raj Kapoor, and married her . And they  loved happily ever after.  On screen, Dutt Saab never hesitated  in  doing women-oriented vehicles  which addressed  the issues  of  their  upliftment , empowerment  and  equality.  Here’s looking at Sunil Dutt the feminist reformist.

1.     Sujata(1959): Sunil  Dutt and Nutan shared a  very special onscreen rapport that stretched  into  6 films, none as relevant as  Sujata. In this  Bimal  Roy directed drama on the upliftment  of  an adopted Harijan girl, Dutt Saab played  Adhir a progressive poet who  insists  on  marrying   Sujata even as his  conservative aunt(Lalita Pawar)  threatens  to disinherit him. Who can forget  the lovelorn radical hero singing Majrooh Sultanpuri: Jalte hain  jisskke liye mere khwabon  ke diye…over the phone to  the tearful heroine?

2.     Sadhana(1958):  A   year before Sujata, it was Vyjanthimala  in Sadhana  whom a  righteous  professor brings home from a kotha  and presents  her as his wife to his  ailing  mother. In the end Dutt Saab insists  on marrying the tawaif .Eventhough samaaj thinks she doesn’t deserve a second chance,he does. Sahir Ludhianvi’s  hardhitting poetry against the perverse  practice  of patriarchy still rings true: Aurat ne janam diya mardo ko, mardo ne use bazar diya.  jab jee chaha masla kuchla, jab jee chaha dutkar diya. Vyjanthimala  who did  3 films with  Dutt Saab says, “He was a true  gentleman and a progressive  man and a rational  artiste. The  way he conducted himself  with  Nargisji made every woman in India wish he could be their husband.”

3.     Nartaki(1963):  Again, the reformist.The man  who doesn’t only mouth  feminism. He practises  it. In this  neglected  film  directed  by Nitin Bose, Dutt Saab  was  Prof Nirmal Kumar who won’t let an  uneducated  daughter  of  a prostitute  suffer her mother’s fate. Dutt Saab tutors  Nanda into an enlightened  world.Dharmendra  in Sharafat and Chaitali  echoed Dutt Saab’s   role in Sadhana and Nartaki.

4.     Darpan(1970):  Dutt Saab again in  a  reformist mode, marries  a prostitute (played  by Waheeda Rehman) brings her home.Trouble starts when men who  had  slept with her in the past  begin  to   sneer  at  the  marriage  between  a Ideologue  and a  Fallen Women. The film shows  Dutt Saab fighting  off all social and  familial  opposition to stand by his wife. The  famed South Indian director  Adhurthi Subba Rao(who earlier directed Dutt Saab in the superhit  Milan) insisted on  naming  Dutt Saab ‘s character Balraj Dutt. That was  the actor-parliamentarian’s real name.

5.     Zindagi Zindagi(1972):Dr Sunil(Dutt) has a visitor from his  past. The woman he was  once in love with  is back and now  Dr Sunil insists on marrying  the widowed  beloved. Bengali legend Tapan Sinha’s only Hindi  film was a reformist drama  about widow  remarriage. Waheeda Rehman who  played  the widow says, “It was always a pleasure working with  Dutt Saab. I  was directed by him in the great Mujhe  Jeene Do and  Reshma Aur Shera and I  co-starred with him in  several films. He  was  thorough gentleman , chivalrous and courteous.”

6.     Chirag(1969): When Asha  cannot conceive, her mother-in-law insists that her son  throw his wife out  and remarry.No  prize  for  guessing who plays  the man who won’t  listen to his mother’s evil  plans(no prize  for guessing the evil  mother was Lalita Pawar). Sunil Dutt stands by his wife and even  looks after her  when she loses her eyesight. Asha  Parekh who played Asha  recalls Sunil Dutt  fondly.  “He was my friend and  a  very supportive co-star. Once  when we were shooting together for Chhaya  I  hid his chappals  in  the studio. He  had  to go home barefeet.He was full of hope and  encouragement,  kind considerate  and  generous. One felt safe when he  was  around.”