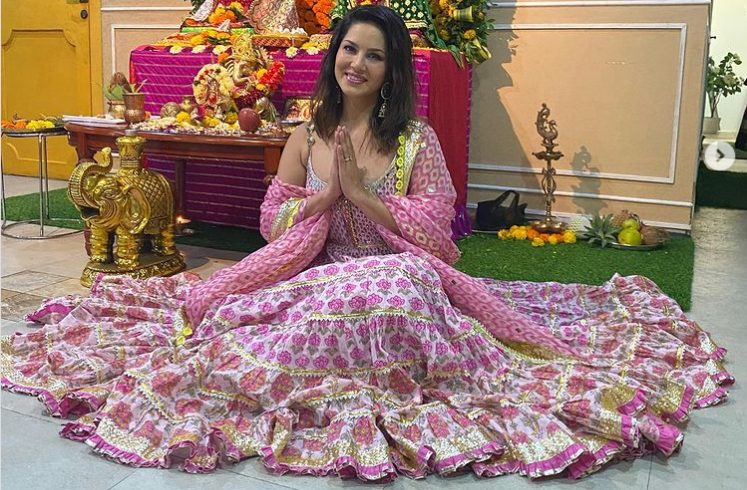 Bollywood star Sunny Leone dazzled her fans recently with brand-new pictures of her family celebrating Ganesh Chaturthi in beautifully designed ethnic outfits for the occasion. Leone has been a controversial figure in the eyes of some media, but her fans have always appreciated that she’s kept her heritage alive, despite living in Canada and now California for most of her life.

Here she is pictured in front of the elaborately decorated altar on the holiday, wearing a new dress designed by another local, Maayera Jaipur (@maayera_jaipur). 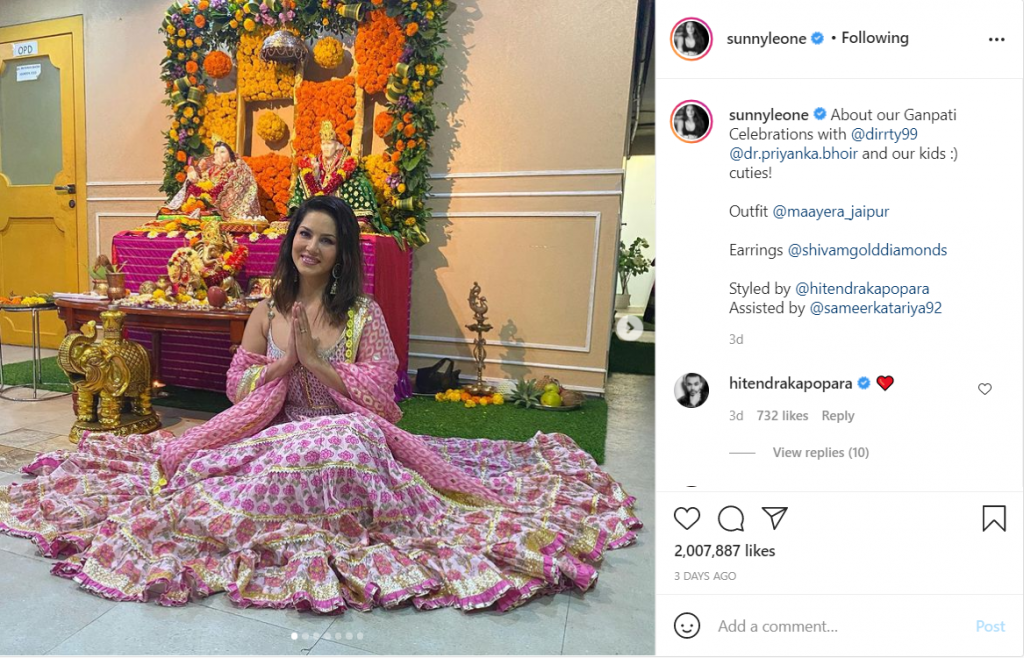 In another photo posted by the actress, her daughter is wearing a matching pink outfit, while her boys each don their own blue and orange kurtas.

Actress Sunny Leone has always been one of the most searched celebrities in India, known for her fearless attitude and ability to hustle despite high-pressure environments. Starting in the adult film industry, Leone has modelled, evolved into a dancer and music artist, become a wife and mother, and done all of that while climbing to the top of the Bollywood ladder — impressive when you consider the idea that Bollywood is an industry that’s still grappling with showing kissing scenes.

How was this Canadian-born and raised child of Indian immigrants able to break the barrier and become a beloved star in her parents’ country? According to several interviews given by the actress, it is because her parents instilled cultural values which allowed them to continue to celebrate and hold onto their culture as a family. In one interview with Global News, Leone explained that her love of Bollywood and interest in the industry came from spending many hours with her family watching her parents’ favourite classic movies and “eating junk food” while sitting together.

Now, as a parent of three with her husband Daniel Weber, Leone has been shown celebrating a variety of Indian holidays and raising her kids in the culture, all the way from their house in California. Leone has been living in Los Angeles since the start of the Covid-19 pandemic, luckily for her, she’s been able to take the time to do this with her very young children, Nisha, Noah, and Asher.

Just last month, Leone was seen celebrating Raksha Bandhan with her children as well. She posted another series of photos on her Instagram dressed up and celebrating with her family. The post included cute videos of Nisha trying on various rakhis using her brother’s wrists.

Leone’s immersion in her culture goes beyond holidays. It would have to, in order to make it in Bollywood.

Leone has her hands in a variety of different gigs. From plugging local music on MTV, to hosting several local reality shows, representing Indian designers at New York Fashion Week, to even something as controversial as becoming a Teen Paati Host

Of course, being raised in Canada and living life in the entertainment industry, you can’t expect Leone to be entirely traditional. The actress frequently dazzles her fans and keeps up her appearance by posting her lavish lifestyle, beach photos, and celebrity encounters on her social media pages. Leone’s untraditional lifestyle has left her at the mercy of many critics, who have even accused her of “destroying Indian culture.” However, her fans know better! Leone frequently talks about her journey to becoming accepted in mainstream Bollywood and lets people know that she’s worked hard for her success.