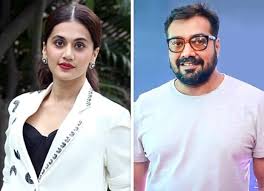 The lurid language  of the allegations of sexual misconduct levelled at filmmaker Anurag Kashyap by actress Payal Ghosh has left many of Kashyap’s  friends and well-wishers  shell-shocked.

“This is not the Anurag Kashyap I know,” one of the prominent actresses he has worked with shared with this writer adding, “Please don’t quote me.”

However Taapsee Pannu who starred in  Kashyap-directed  Manmarziyan and  also played one of the leads Saandh Ki Aankh which Kashyap produced, stands by  Kashyap while defending Ms Ghosh’s right to have her say.

Says Taapsee, “I hope she gets heard about what she has to say .A thorough  investigation should  be  done in regards to her claim.”

Taapsee who is  a friend of Kashyap feels he  is incapable of misbehaving with women. “As far as I know Anurag , he is one of those people in the industry who have utmost respect for every woman he knows.”

Having worked with him, Taapsee has seen Kashyap’s  work ethics first-hand.

She says, “I’ve  never seen him ever disrespecting a woman ,  forget about ill-treating  or harassing any  woman.And  I have heard the same things about him from the women  who have worked with him and  whom I’ve met.”