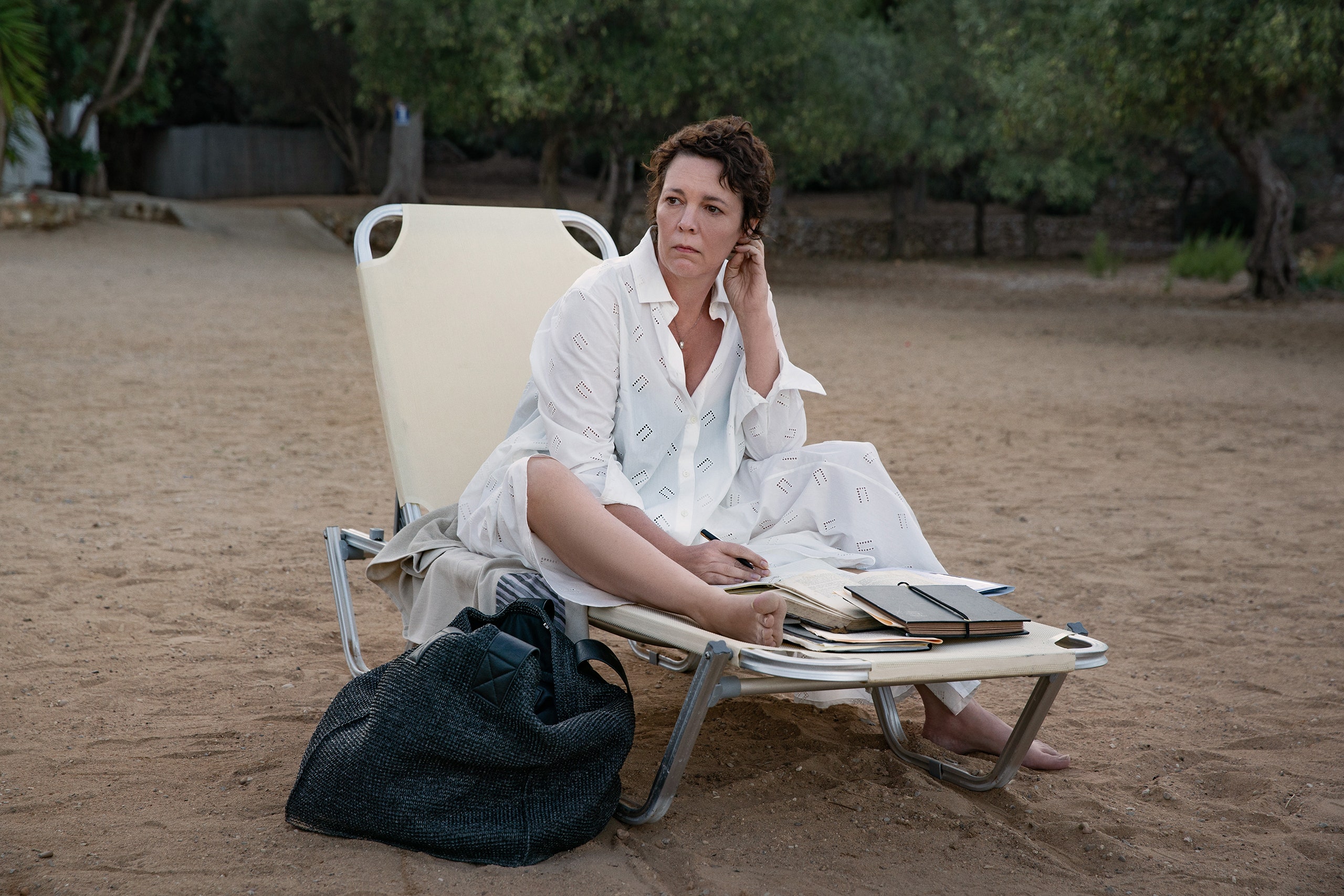 While there is  so  much to rave over in this film, there is  also  plenty that is esoteric in a non-productive way. We will come  to that later. To begin with Olivia Coleman(fantastic as ever, though I’ve always found her flustered  personality a  little annoying) playing Leda,  a professor and academician specializing in  the poetry of Yeats, arrives at a  secluded  Greek island for a  vacation.

On  the beach(which  is an ideal setting for paradise soon to be lost in  flashbacks)  Leda  sees and  bonds with a  stunning young woman and mom Nina(played by the bewitching Dakota Johnson whom we need to see much more of onscreen). There is an instant   uneasy camaraderie  between the two disparate women, separated  by generations . They are  bonded  by a rather   bizarre secret: they were both  stifled in their individual spaces  by the  need to be  a good mother.

Strangely this  subject  of  smothering motherhood is dealt with in  unsettling close-ups: little girls(never boys, not this time)  poking their  mothers awake, slapping them  to get their attention, occupying their mother’s space by birthright.

Director  Gyllenhaal  wants us to feel how CROWDED  the  mother feels, specially when  she is trying to balance domesticity with education .As the  young  Leda, Jessie Buckley looks nothing like Olivia Coleman who  plays  her older avatar. Buckley in  fact gives Coleman a  run for her money with a performance that pours out the  character’s  frustrations and fractured  loyalties  in waves of   calibrated indignation:  mothering duties  stifling career, husband not  able to rise to  the occasion,etc . Stage set  for infidelity and desertion.

Off  goes  young Leda for a  3-day  literary  convention where she  meets the magnetic  Auden-reciting scholar , played by a hopelessly miscast Peter Sarsgaard.In spite of  the flashback being more of  a set-up than a true  dilemma  of post-feminism motherhood, Buckley holds her own, as does  Dakota Johnson  , against  Coleman.

Coleman’s Leda hiding from her past on the Greek island,  is  leaden  with  some  bizarre  angsty  baggage. I could not  till the end  figure out why Leda steals  Nina’s little’s daughter’s  precious doll: some kind of sisterly revenge on  demanding daughters? Or a just whim?
The ending  too , with an orange being peeled like  a snake(eye-rolling metaphor), too is problematic, as are  the  sketchy  male  characters who are either poseurs or  provocateurs  or both.

Finally, though, The Lost Daughter is  a sumptuous tragedy,  good to look at and caliginous with unresolved emotional  crises. Olivia  Coleman  is  appreciably affective  as a woman torn between her failures as a mother in  the past, and her lack of  guilt about her selfimposed  solitude  in  the present. This is  not a  very likeable  woman. The film, though for  all its flaws, is compelling in its  moral conflicts.