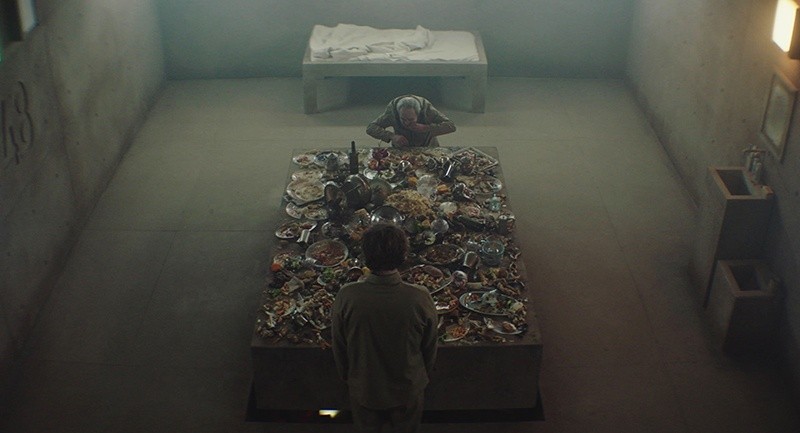 The Platform(Spanish, with English subtitles, Netflix)

Responses to this eerily  prophetic powerful but perverse  parable on  a Corona-like  crisis zone has either been  damning or wah-wahing by shocked  critics.
I’d rather go with the damning  than  the wah-wahing. Already sickened by  the excesses  of  panic alarm and  despair  in  our  daily  lives , it is horrific to see a futuristic  horror film about the degenerative effect  of  war and sickness, to become a reality for civilization.

This one  must be avoided at  any cost , because it brings no  joy to our gloomy imprisoned existence. Additionally this Spanish film vomits  its venomous bile on a depraved civilization with graphic description of cannibalism and excretion, not in any particular  order.Human beings are shown as survivalist degenerates.And when a bit of compassion grows between  the  hero and a  woman who is tossed on  the  mobile dining table from  floor to floor in vertical vileness, almost like an inedible dish  that once was  inviting, the  compassion is soon smothered to  death.

The setting is  a vertical  multi-storeyed one-room prison building  where we meet the protagonist  Goreng(Iván Massagué). Just why he  is  in prison is  not  of consequence. As he moves from  level to level  in pursuit of food and freedom(strictly in that order) Goreng encounters  four  very different co-prisoners  who offer  him glimpses  into the sickening depths of deprivation that the survival instinct prods awake in man-kind(when pushed to  the wall, there is  nothing kind about man).

The most vicious of  Goreng’s  co-prisoners  is  Trimgasi an aging sly bloke who  ties up  Goreng  during his sleep with plans to  feed on his  flesh  as food gets scarce.

Save your stomach-churning for  later. There is plenty more here that can drive the  more tender-hearted viewer  into a state of emotional lockdown.At its  heart this heartless modern horror fable  is  about  the food feud. As  the  food table  is  conveyed from one  floor of  the prison  to  another  the  quantity  dwindles drastically only because those on the top floors are eating way too much.

The metaphor on  food hoarding during these times  of  enforced  lockdowns is  hammered in with  a bludgeoning  directness. There is  very little tact and way too much  gleeful gore and  graphic turpitude  in this uneven if somewhat intriguing drama  of depravity  decimation dread and  death.

Do yourself a favour. Stay away from this unorthodox take on a nihilistic civilization eating into  each other’s territory.Watch something happier. Like the PM Modi telling us how we can save ourselves.