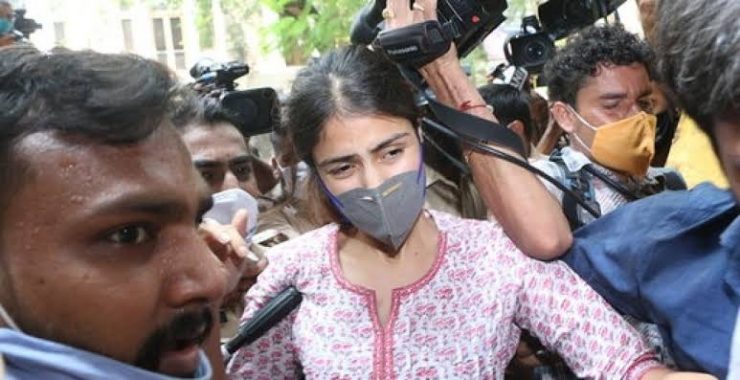 The arrest  of  Rhea Chakraborty  brings to  a  close to the  worst witch hunt that I’ve ever come in modern  times. It was very simple, really. If you  can’t nail her for Sushant’s  death  then pin her down for  something else. But she  had to  go in. Someone had  to pay for Sushant Singh Rajput’s death.

A very prominent  filmmaker  while discussing the current unsavoury salacious back-and-forth  on Sushant Singh Rajput’s death, observed that Rhea Chakraborty’s  career  is  over.

“Not that  it ever  started,” he added , not intending it as  a cruel barb. Nothing that can be said about Rhea at this moment can be  crueler  than what  destiny has  doled out for her. A  career that  never started,   and  a love relationship that came  to a deadend. Quite literally.

Also Read:  Kangana Calls Urmila A ‘Softporn Star’, Urmila Says, “I Don’t Think She Deserves A Response From Me”

It couldn’t  get worse  for  a starry-eyed   girl from Kolkata  who  came to Mumbai with the intention of becoming the  next Sharmila Tagore.

A  director  who has worked with her remembers  her as a fun-filled super-ambitious  ball of energy. “She was  all over the place . Everyone  liked her on the set.  She liked to be liked. She  was  pretty and  determined to be a big star. I  thought she would go far.”

Very soon it became apparent that Rhea’s career was  not going anywhere.  She started with a Telugu films .But  got no more  offers from that industry.

“Somehow something was not quite right  about that girl,” a Telugu  superstar’s wife  recalls telling her husband  to steer clear of ‘Madame Random Stardom’…whatever that means.

Her Hindi debut was a Yash Raj film . no less. But Mere Dad Ki Maruti featured  Rhea neither as Dad nor Maruti. Just the  pretty prop.Likewise in Bank Chor, arguably  the worst film Yash Raj has  ever produced.  It  was  to feature Kapil Sharma  in the male lead. But apparently he  wanted Deepika Padukone as  his co-star.Apparently no one wanted Rhea  Chakraborty except Sushant  Sungh Rajput.

Rhea  was stuck in the middle of a non-starting career.

Luckily Mukesh Bhatt “found” her and cast her in a pivotal role in  Jalebi in  2018. This  was meant to be her grand launch.

Says  a source  very  close to the  Bhatts, “Mahesh Bhatt really believed  she  was star material. He  mentored Rhea , launched her in style in Jalebi.  But when the  film bombed Rhea was shattered, her future seemed  uncertain.”

This is when she met Sushant Singh Rajput. A  successful stylish  affluent and powerful superstar. The two soon became  a couple. Sushant  began recommending Rhea as  his leading lady.

A  filmmaker  who had offered Sushant  the lead in his  film was shocked when he requested Rhea as  the female lead. “I didn’t think it  was  his place to recommend  any heroine. He wasn’t Salman Khan that a producer would quietly sign Katrina Kaif.”

Not  that  Rhea was  anywhere close to Katrina. A bottlenecked career with no hope for a future Rhea today is  what she always wanted to be.

Famous. Though not  in the way she had dreamt  of being.