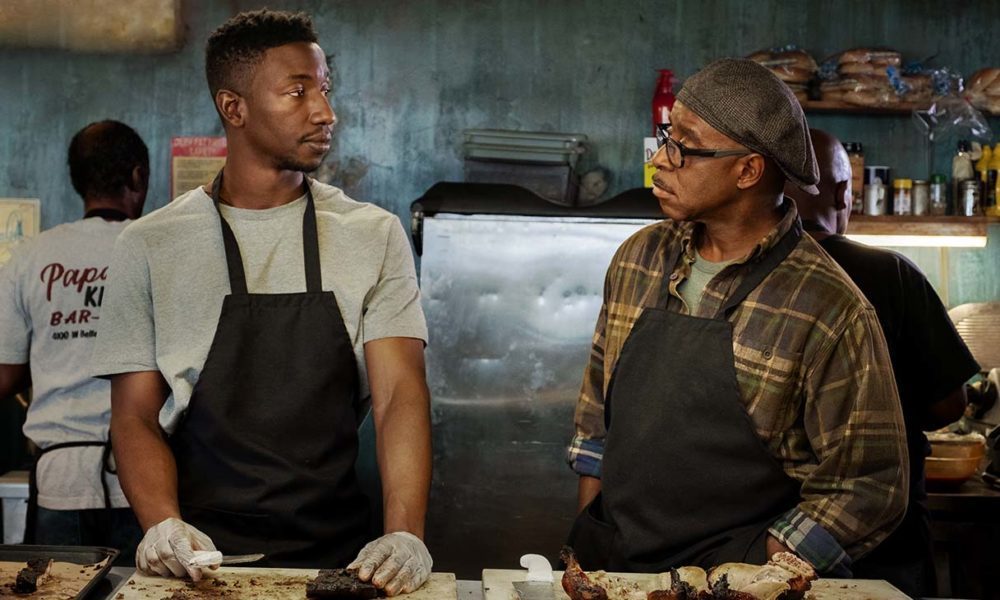 Starring  Mamoudou Athie as Elijah,Niecy Nash as Sylvia,Courtney B. Vance as Louis

In this season of a home-viewing  boom, another American  feature film , this one about a son who’d rather be  a sommelier than a  restaurateur , looks like  a Black American version of the Parsi film Maska that  Netflix released just two days earlier.

Sons  don’t want  to go into their father’s business, no matter how  passionate  the patriarch is about his calling. It’s a natural process of genealogical  recoil.And we have seen any number  of films  on the theme. Uncorked  uncorks no fresh fumes, no  virgin  aromas . It is conventional tale told with routine flourishes  of wit and drama.

For a  film about food and wine there is a  surprising lack of culinary seductiveness  and a lot of whining  about wine which we are meant to get impressed by.  All the whining (about wine) does is to  make us pine for Om Puri and  his screen son Manish Dayal  in  100 Foot Journey,that other far superior  drama on paternity  rights and culinary traditions.

The problem with Uncorked is, it conveys  no sense of  history only a feeling of hazy  pride  in the history  of lineage and tradition. The father Louis (Courtney B. Vance) is  into barbecues  and  the son Elijah(Mamoudou Athie) is into  wine-tasting. Their clash lacks  any serious perspective because the conflict seems less cultural and more a  conformist’s take on non-conformism. Every move in  the plot has a chess-like precision.

For all  the wine that flows through the film the narrative is as as dry as a winecellar after  a  raid.

The  family business  which seems so sacrosanct  to  the plot is dismissed  in a few scenes where we hear the  father  grimly proclaiming his pride   about his heritage. Neither Courtney Vance  or Mamoudou Athie seem  to suggest  any kind of  deep affinity with their  past, shared or  individual.Their  performances are  serviceable ,clinical and they don’t  move us  even  after a family tragedy overtakes their lives.

It is Niecy Nash as  the  mother who brings a certain vivacity  into the  otherwise-dry storytelling. In her  hackneyed  role of the mother  trying to balance the father and son’s egos, Ms Nash is  delightfully   animated and exasperated.There are lots of not-unimportant characters  playing young wine-tasters studying their niche vocation in  Paris. But they don’t come to life  in  any vital or  appealing way.

The films wears  a defeated  look, as  though it  knew it had  lost the battle even before the Coronova outbreak.So  is  it barbecue  or wine for Elijah at the end? Does  anyone  care?

Watch Them ON OTT