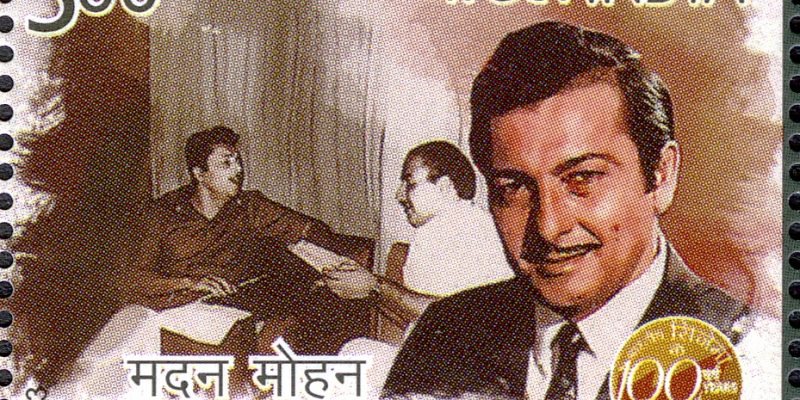 On a clear day you can see him forever. Madan Mohan, the talent extraordinaire who never got his due during his lifetime, is today one of the foremost retro- legends of Hindi music.

Madan Mohan did for the film ghazal what God did for the man by giving light to earth. The melodic omnipresence of Madan Mohan is attributed to the timeless quality of his compositions. The noted music director C. Ramachandran had remarked: “What do you mean Madan was only good at composing ghazals? Madan was good at every single thing he composed .Madan’s light compositions have the same individualistic quality as his serious songs. What’s more, I don’t think anyone of us had this knack of picking the right instruments for the right song.”

“Perhaps he felt I could give his compositions what they required,” she said  guardedly in her won’t-cause-hurt-to-anyone tone that she adopts whenever her undisputed supremacy is discussed

Recalling her first meeting with Madan  Mohan lataji says,  “We sang a duet Pinjre mein bulbul bulbul  bole together in the film   Shaheed  in 1948   for Master Ghulam Haider. That song about a brother and sister singing together, never got released.One day suddenly he came up to me and said, ‘Tum raakhee baandhne nahin aayee mujhe?’  From that day he was my Madan Bhaiyya. I was close not only to him but to his entirefamily. I am still very close to Madan Bhaiyya’s son Sanjeev Kohli.”

It was more than just faith in her vocals. Madan Mohan selected Latji to be his main voice because he knew only she could touch those heights of sublimity that his tunes to achieve the seven musical notes. If you hear Madan Mohan sing Mai ri, main kaase kahun peer in Dastak in his own voice(since she didn’t have the dates for the original recording), and then hear her take up the tune in her voice we know what the singer achieved in Madan Mohan’s compositions.

Says Lataji, “His ghazals have no parallel. But he could also compose every other kind of song like the folk tune ‘Jhumka gira re’ which my sister Asha sang. Why don’t we regard talent for what it’s worth when it’s with us?” wonders nightingale Lata Mangeshkar who sang a majority of Madan Mohan’s mindnumbing melodies.Madan Bhaiyya was my rakhi brother and enormously gifted. His ability to create tunes was like an ocean. Some of his most loved compositions, for example, “Aapki nazron ne samjha’ came to him in a jiffy. He was very particular about the sur and other components of the composition. During the recording of ‘Naino mein badra chhaye’ for the film Mera Saaya, he broke the glass partition in the recording studio because a musician was playing off-key. That’s why, even today, his numbers like ‘Lag ja gale se’ and ‘Aaj socha to aansoon bhar aaye sound so fresh. Sach much, unke barey mein aaj socha to aansoon bhar aaye (remembering him brings tears to my eyes). I remember when he lost the Filmfare award for his very popular score in Woh Kaun Thi; I told him he deserved it. His response was a quiet, Tumne bola wohi qafi hai (your just saying this to me is enough).”

There is so much more to the Madan Mohan- Lata Mangeshkar combination than meets the eye/ear. The sheer grit and glory of their collaboration defies common explanation. I am told there are scores of songs that he composed for his favourite voice.winch were either never recorded or never released. For Woh Kaun Thi. we’ve heard only a fraction of the recorded music. But what a fabulous fraction!

Isn’t it  infinitely  ironical  that this man of melodious dimensions never got round to winning an award until 1971?! When he won the National Award for Dastak and Mai  ri, what a knock-out score that was! Of  the three  solos by Lataji , Hum hain mata-e-kucha-o-bazar , Baiyyan  na  dharo and Mai  ri, how does  one  pick one or even two?

Madan Mohan was like an emperor in exile. His entire career, which began in raga- earnest in 1950 with Aankhen, was a litany wows. Critics and connoisseurs raved over Madan Mohan’s songs. But the charts told another story. 80 percent of Madan Mohan’s classic melodies went into B and C grade movies. Apart from Chetan Anand and Raj Khosla, no top-notch filmmaker gave Madan Mohan a chance to compose in big-banner projects

Until his death in 1975, Madan Mohan had done 104 films. The continued failure of his films and the changing environment in the industry led him into depression. He  began to drink heavily. He died when he was only 51. Providentially, in 2004, Madan Mohan’s elder son Sanjeev Kohli was able to transcreate his unused tunes in Veer-Zara.

Ironically, both of Madan Mohan’s posthumous scores for H.S. Rawail’s Laila Majnu and Gulzar’s Mausam, released in 1975, turned out to be money spinners. The man who composed gossamer feelings dressed up as songs, had finally arrived.