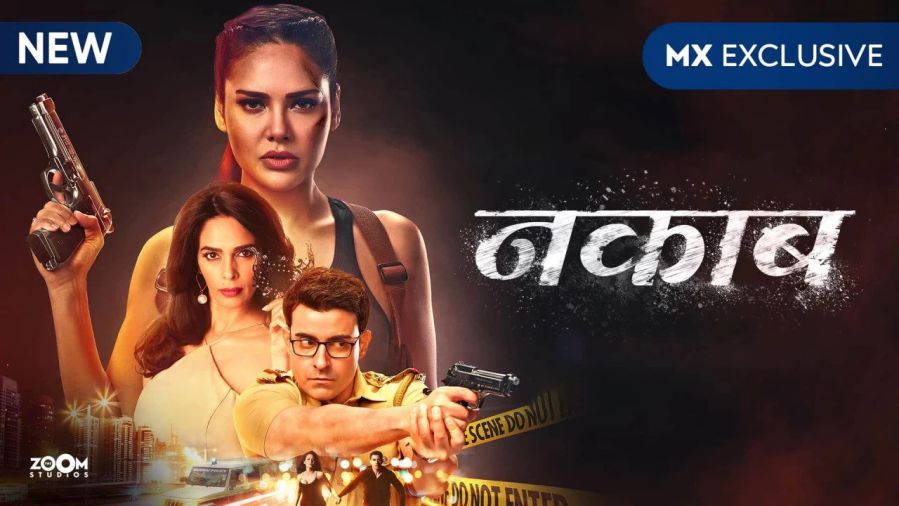 Nakaab : Just the horror of watching Mallika Sherawat play a Ekta Kapoor clone is  enough to put you off all  of the streaming platform for at least 3 months. Sherawat, long missing from  our poor thirdworld country,  has been seen whooping it up  in LA and Paris. Either she  has ancestral  money or a  cheap series such as this one pays more than  we can imagine.

Under normal  circumstances  an  actor in a series as  lowbrow as this  can’t afford a decent  home in Dharavi let alone Paris. But  then , Ms Sherawat is  special.She always has been , even now when she’s clearly a has-been.She plays  a television producer Zora Mehra.She wears smartly cut executive suits and smokes  like a chimney to prove it.

The heroine of Zora’s  popular series Vibha Dutta is murdered.And Zora is  a prime suspect. Not that she cares. She has  a whole battery  of  minions under her stiletto heels, literally. We see her bully a male associate by first  pounding his  head on the table for being caught  in gay pictures on  the social media, and then putting her legs up  to his  face  in a display of power that Ekta Kapoor must try some day.

Soon after Zora/Mallika is  necking with  Vibha Dutta , in flashbacks which have  seen better days. The production values are so poor that  it’s hard to say what that the characters are feeling.The camera is not just restless but unstable,quite  like the  characters in this series.

Also Read:  Doctor Strange In The Multiverse Of Madness Is A Very Strange & Niche Film!

It wouldn’t be right to ask what is wrong with Nakaab. It would be better to ask,what is right with it.The answer is, nothing!  Every aspect of this tawdry trashy series deserves to be hooted and booted. The  biggest  suspense  here is not  about who killed Vibha Dutta, but who brought Ms Sherawat out of cold storage for this stiff cadaverous act.Her  close-ups are horrific. Her dialogue delivery is so  stiff she sounds  like  a weather forecaster  on a rainy day.

In the climax Ms Sherawat is required to  laugh and smoke at  the same  time. Clearly the  double act is beyond her  performing range. Dialogues  like, “Aradhana ki Sharmila Tagore ban-na chahti hai tu” don’t  help her cause.

More flexible  are Esha  Gupta and Gautam Rode  as cops  trying to unravel the  Vibha Dutta case. These are  actors who  at least know their  jobs and  follow their cues. Not that anyone cares  about who did the poor girl in. The  people behind this gooey mess deserve to be  investigated for  culpable  homicide. Killing good taste in the name of  instant  entertainment should be made  into a  cognizable offence.

Related Topics:NakaabNakaab news
Up Next