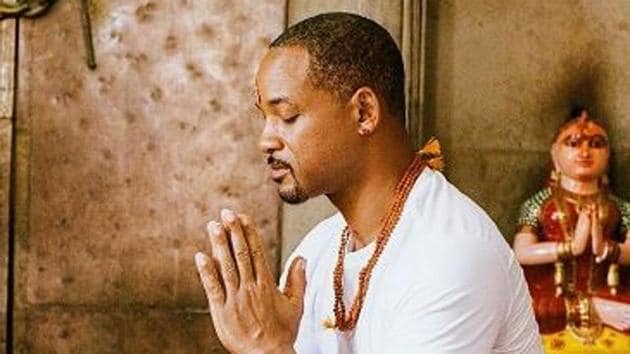 I have  always liked  Will Smith. He exudes a rare positivity  in his personality. The only time I saw  him angry was when a “fan”(male)  had  grabbed  and kissed  him on the red carpet. There is  only so much adulation one can take…right?  That  apart,  Mr Smith’s  Will-power is  exemplary. He never  loses  his  cool in public. Never cheated  on  his wife. In fact his wife  of 24  years betrayed  Will.In a  public declaration, she  outed her brief relationship with another  man. Will Smith  forgave his wife. He  made  sure their marriage survived the storm.Sometimes it takes just one to clap.

Will Smith is  an honest man and an honest superstar. A  man  who has not become a  victim of his superstardom. I  know of at least two Indian superstars who  are so  cut off from reality they  don’t know who they really are. One  of them an iconic  superstar  and a role-model  for many actors,  is  acting all the time. The first thing he  does  every morning even  before  brushing  his teeth is put on his wig. The performance never stops.

The  other superstar is  very costly to  producers.  Besides charging a  bomb as his fee he  arrives for a  9 am shift at  5 pm. On  top of  all that,  every film of his needs an extra 1.5  crore  rupees  in  the budget   for photo-shopping his  double chins and  extra  flab during  post-production.

How  much guts  must it have taken Will Smith to click himself  with  all the flab he has accumulated  during lockdown and  show his  fans what he  actually looks like,  photo-shopping be  damned.

It is rare  for  a superstar  to be so connected to reality.Rajesh Khanna,  India’s first superstar lost touch with  the real  world soon after superstardom  hit him. He  started believing in his  own  myth.Every successive  superstar  in India  has  been  a victim  of his  own image. They may seem  to be down-to-earth and modest. But trust me ,they are are all oblivious to  the real world. To them , flattery is fact. Criticism is  fiction.

Do not,  repeat DO NOT, make the mistake  of  taking their offer  to be truthful  seriously. If a superstar asks you to be honest  about his performance he  means he wants to  hear only  praise. If a superstar  praises  you for your opinion it means you have praised him  and his  work. Try  criticism,constructive as  it may be, and you are no  longer  a friend.

I remember one superstar  accusing me  of  being a follower of  the ruling government, after I wrote something he  didn’t like. I  have no clue how my comments on his work reflected  any kind of  political ideology. Who knows how the minds  of  superstars work? Certainly not  the superstars themselves.

Will Smith is  a rarity. This  Smith doesn’t believe in his  own myth.He can see his paunch.

On the other hand  Bollywood legends Waheeda Rehman and Asha Parekh  refuse  to  dye their  hair to look younger.

Belying her  70-plus age Ashaji  chuckles playfully   as she defends her right to  greyness. “I’d rather die than  dye. Why dye? Whom are  you fooling with that  jet-black hair  except yourself after a certain age? It is too cumbersome  to  go through the  process of  dyeing my hair only to feel good  when I  look  in the mirror . I’d rather be  my natural self.”