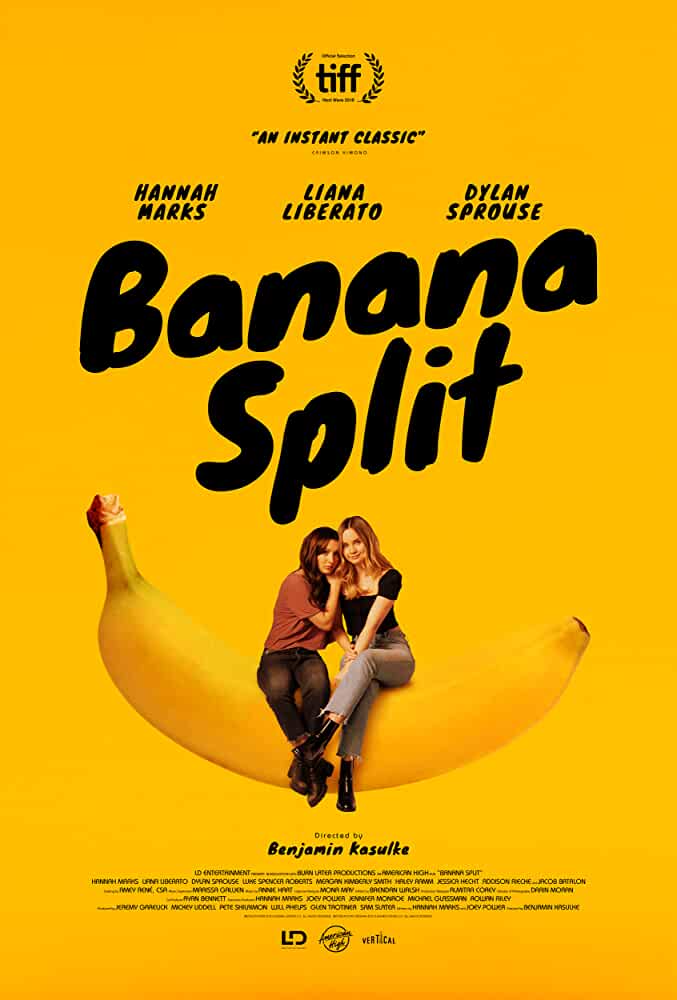 Barring  an Eighth Grade  American teen comedies  are like instant noodles.Eat  digest  forget move on… Banana Split another one of those big-screen Coronova  casualties to move immediately to DVD , is  a popcorn  film without  any pop in its corniness.Teeming with  twinkle-eyed teens with unnaturally  large  libidos and even more unnaturally white teeth,  so  taken up their own pathetically constrained  preoccupations that  I  was left wondering how they are coping  now with the  lockdown crisis.

It’s one thing to worry about  straying boyfriends and  giggly girl bondings in normal times. But to even  consider such  a  life  during times of  a pandemic is a ludicrous  thought. The  main characters are two beautiful young female adults, almost teenagers Clara(Liano Liberato) and  April(Hannah Marks) who are into the same  vermin-like  dude  .

But  they soon discover  a mutual friendship that  blissfully precludes the  chap they thought they loved.It’s a likable premise for a lightweight rom-com.  And  the two  girls portray non-homosexual female kinship with endearing cogency. I specially  like Liano Liberato who has an interesting  personality. Given  better material she could be far more charming. Here she is  constrained by  a plot and dialogues that read  like snapchat print-outs.

The  interesting part is  a dinner sequence  where Clara introduces April to her family. The  banter here is  more  bouncy than frisky, though Clara’s  precocious younger sister  is a carbon copy  of the  character  in To All  The Boys PS  I Still Love You, a film that typified the asininity  of teen flicks  about imbecilic romantic  conflicts.

Also Read:  Ranbir Kapoor:  “I hope that somewhere up there my dad is looking out for me and he is proud of me.”

Watching Banana Split I  was reminded of a 1979 Basu Chatterjee rom-com  Baaton Baaton Mein where a heartachingly  beautiful Tina Munim tells her uncle  how tough life is  for her.

“I know what  you mean. In the evening you’ve to  go to a party. You can’t decide whether to wear  the  black or red dress.  Really tough,” uncle deadpanned.

Stripped away  of  the irony of a young generation  trapped in its own trivialities Banana Split takes itself  too  seriously to qualify as satire. It  will entertain you only if you think chucking an unreliable boyfriend  to have a meaningful relationship with his ex-girlfriend is   a fun idea.

Ram Gopal Varma On Why He Thought His Joke On Getting The Corona Virus Was Funny.