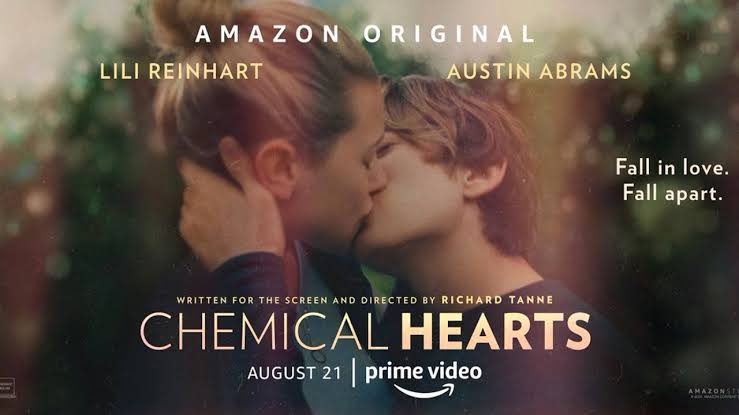 Would  you  trust a  love  story whose  protagonists are  named  Grace Town and Henry Page?  What   kind of manufactured names are these? Writer-director Richard Tanne(whose  earlier film  Southside With You was  a corny but cute  recreation of Michelle and  Barack Obama’s courtship)  thinks  planting  hackneyed  tropes into a romantic  story  would instantly  induce lushness into the  proceedings.

But  Chemical Hearts only proves  that if love is  blind than  it can also be bland  in  the wrong hand. Director Tann pieces  together a  threadbare story of two dull highschool students who  discover  a common ground  after  an hour of  cripplingly  dull courtship and exchange  of dialogues that  go, ‘Please help me because this is my first time.’

That’s  the  young man  speaking. After a while the  emotionally and  sexually more experienced heroine tells  him  not to  try too hard. It  isn’t working.

The same  goes for the film which keeps pushing for passion. But  comes up with zilch. The emotions seem like straws in the wind.Wispy and flimsy.The  only  saving  Grace  is  Lili Reinhart who   plays Grace.There is something  about her face. Given better material she can  score points.

Besides  a script that limps  Grace  has  a problem .She was in a road accident that  killed her  boyfriend and  left her limping on a walking stick.Besides  chronic  callowness  Henry suffers from  low selfesteem and a pretension  to   literary  tastes which  Henry shares with the  film’s writer who keeps dropping names like Pablo Neruda.

Neruda in this lowbrow  trip to shudderland  is like   Tendulkar  at a  roadside cricket for under 12.

The sheer  amateurishness  of  the  presentation will drive you  up the wall. What makes these people think we can actually bring ourselves to care  about what happens to their precious love?

Somewhere  after 45  minutes  of  boredom we are  let into a big secret from Grace’s  past.

“She loves  someone else,” Henry blurts  out to his therapist-sister who  spends  her time sobbing(that’s what you get  when you become a part  of a  film as awful as  this),  or  explaining  to her  brother(a Timothee Chalamet  clone)  that  love is  nothing  bit chemical reactions.  Chemical  Hearts presumes  we would instantly get interested  in the central love story. Once we are  introduced to  the  two protagonists (one troubled, the  other troublesome)   all the rest  of  the characters  are  painted  into  a hazy corner.

There is  nothing here to  hold our interest. Not even a  sub-plot about a lesbian  couple which plays out like  a  school boy’s fantasy of what a same-sex romance would like on screen.

Not appetizing nor tempting, simply exasperating. What a waste  of time.