The  Best OF The OTT In Month Of July 2021
Advertisement

Ex-Stream  Benefits :  The  Best  OF The  OTT: Introducing  A  New Monthly  Column On The Best Of  The Month That  Was.

Sarpatta Parambarai(Amazon Prime):  This  llengthy lavish period film was decidedly  the OTT event  of  the month  of July.The  story is set in North Chennai during the  1970s when  a state  of  Emergency was declared  across  the country.  Tamil Nadu  stubbornly maintained  its autonomy  . The politics  of the region serves as  a  solid backdrop for  the  clashes that happen in the  boxing ring when all  pretence  of decency is  abandoned as  the fighters get down to basics, hurling verbal and physical blows  in a show  of  crass sportsmanship that the  film’s mood captures and reifies  brilliantly  in  its characters’ restless energy,none more so than  Kabilan. In  the  author-backed role of Kabilan, Arya is a  revelation.I  predict  a National award  for the actor.

The  City Of Dreams Season2(Disney-Hotstar):  City  Of Dreams is  about power, politics  and  personal  losses,not  strictly in that  order. The series retains  its compelling core even while  introducing new interesting characters  who grow  as the  yawning arc  of Maharashtra’s politics  opens  up to multiple  interpretations.  We all know who  ‘Saheb’  Amey Rao Gaikwad(played by the brilliant  Atul Kulkarni)  is, right?  The reference  to the  tiger  in  the bedroom that comes  up towards the climax  of  the series is a dead giveaway. The  series balances out the  clichés  of  political corruption with refreshing bouts  of  characterization. Even the smallest  of characters leave  an impact. If absolute  power corrupts  absolutely, is this series  about  absolute  power and  corruption worth seeing? Oh,  absolutely!

Grahan(SonyLIV): Quality conscious  producer  Ajay Rai(who has  invested in  many a significant  cinematic project from  the Marathi  masterpiece Kill  in 2014 to the  most recent  achievement  Fire In The Mountains)  opens  up the wounds of the 1984  genocide, wounds  that never healed, wrongs  that were never righted. Directed  by  Ranjan Chandel, the  8 episodes  have a  certain consistent  momentum in the storytelling, and though  it moves through two time zones, actually  three, the  plot never  becomes  a jumble of  unnerving frisky  jumpcuts , as serials  about multi -time passages tend to.The  story  is pronouncedly dramatic. And that’s how  it should be, considering the improbable  brutality  of what transpired  on those  3  fateful nights when Sikhs were  pulled  out of their  homes and burnt alive. Bokaro was  one  of the cities that was most harshly affected  by the genocide. This is  where   Grahan is set. Shot on location, Kamaljeet Negi’s cinematography  captures that  frozen-in-time quality of  those small North  Indian towns which have  never  grown up. 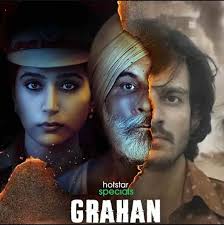 Related Topics:OTTOTT news
Up Next