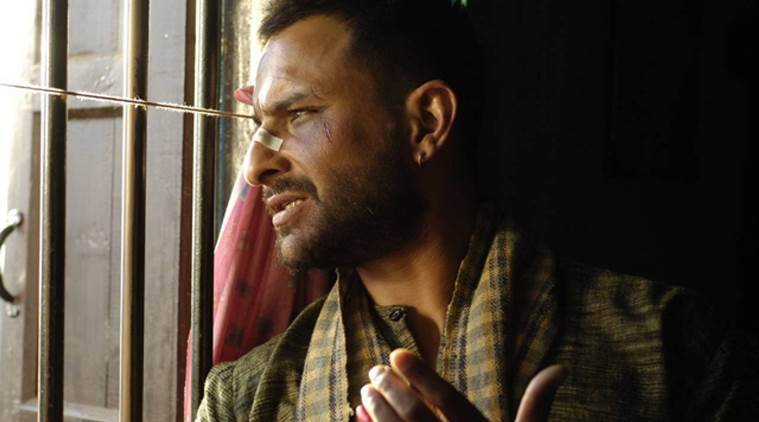 Deepika Padukone’s Tamilian accent in Chennai Express  can be considered either cute and annoying, depending which side of the bed the viewer woke up on.

But ever wondered where our Bollywood divas get their yankee accents each time they return from  the USA? The way Mallika Sherawat rolls her ‘r’s on CNN on Priyanka Chopra teases a tantalizing twang into her tongue when talking to Pitbul just makes you wonner….I mean, wonder  about all the wonderful  voice and diction transformations that our stars have undergone to play a character.

1.      Saif Ali Khan in Omkara: To play the goon Langa Tyagi from Meerut Saif Ali Khan had to get rid of his British twang. Before Omkara Saif spoke even his simple Hindi dialogues as if he was struggling to read from a teleprinter.Langda Tyagi’s role changed Saif’s voice and diction. It wasn’t easy. Director Vishal Bhardwaj’s recorded all the dialogues in his own voice . Saif played the tapes until the diction was embedded  in his head.

2.      Naseeruddin Shah in Pestonji: we’ve seen Parsis like Boman Irani sport Parsi accents. But when Naseeruddin Shah played Pestonjee in Vijaya Mehta’s film he didn’t speak like a Parsi. He spoke the way we would imagine Pestonjee speak. There was no come-see-me-talk showoff quality in the speech. Naseer spoke the way he played the blind man in Sparsh.Without self-congratulation.

3.      Shabana Azmi in Mandi: Her Hyderabadi colloquialisms in Shyam Benegal’s film about a brothel of happy prostitutes was so dead-on you didn’t for a second feel she had rehearsed those lines before saying it.Shabana took to the Hyderabadi lingo so naturally that she had a tough time snapping out of it after the shooting was over.  She even sang a song Main kitti bar bola in that Hyderabadi accent.

4.      Shah Rukh Khan in  Chaahat: In this little-known Mahesh Bhatt film Shah Rukh and Anupam Kher palyed a Rajasthani son and father. SRK who generally likes to retain his own speaking style agreed to a Rajasthani vocal makeover which  for once was not ‘Rahul’ but Roop Singh Rathod the folk singer from rural Rajasthan.

5.      Amitabh Bachchan in Ganga Ki Saugandh: Normally the Bachchan baritone remained untampered . That’s the way the audience liked it. But to play the Ganga Kinare Ka Chora named Jeeva who turns into a dacoit the Big B embraced a Bhojpuri accent and diction.

6.      Raj Kapoor in Teesri Kasam: To play Hiraman the Bihari bullock-cart rider from rural Bihar Raj Kapoor had to unlearn his Punjabi Hindi and convince producer (lyricist)Shailendra that he could carry off the character’s speech. RK worked hard on getting it right. There was a voice coach on location in Bihar to ensure RK got it right.

7.      Dilip Kumar in Ganga Jumna: Before playing the bumpkin  from rural Uttar Pradesh Dilip Kumar wanted to master the Awadhi language of the region. No half-measures for this method actor. The mighty Thespian got himself an Awadhi tutor who helped the actor mould his fluent Urdu into a freewheeling Awadhi-Bhojpuri accent.

8.      Ranbir Kapoor in Besharam:  45 years after Raj Kapoor’s Bihari accent in Teesri Kasam his grandson masters the Delhi-UP lingo for Abhinav Kashyap’s film. Sources from the sets say Ranbir sounds so much like his character that Honey Singh wants to write a song based on Ranbir’s character Babli and sung in the same accent that Ranbir has adopted.Cool.

9.      Ranveer Singh in Ram Leela: You can’t put Ranveer’s enthusiasm level down. For this Gujarat-based adaptation of Romeo & Juliet director Sanjay Leela Bhansali wanted Ranveer to learn the Gujju dialect spoken in the Kutch area of Gujarat. Ranveer went the whole hog insisting on speaking in his character’s accent on the sets and location even off-camera. He apparently drove Deepika up the wall with his bhasha obsession.

10.  Deepika Padukone in Chennai Express: So okay. Her thick Lola Kutty accent gets on our nerves to begin with. But then it  grows on us until we begin to enjoy Deepika’s dishy Tamilian diction. It takes guts to pull off a speech pattern as broad as this. But then Deepika is fearless today.She can play anything. From Meena Amma to Juliet Behn.